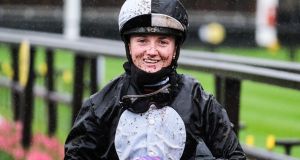 Jockey Hollie Doyle has become the first female rider to win fives races on the same card in the UK. Photograph: Getty Images

Hollie Doyle made history at Windsor on Saturday, as she became the first female rider to win fives races on the same card in the UK — at odds of 899-1.

The fabulous haul was highlighted by the victory of Extra Elusive in the featured Gallagher Group Winter Hill Stakes.

Doyle has been enjoying a campaign to remember in 2020, securing her first Ascot win in June before bagging a four-timer at Wolverhampton and her inaugural Group-race success with Dame Malliot at Newmarket in July.

She reached another level at the Thamesside track, with Mistress Nellie in the first division of the Racing To School Inspiring Young Minds Handicap sealing an afternoon to remember.

Doyle — who last year set a new best for a female rider in a calendar year — told Sky Sports Racing: “It feels great, someone just told me.

“When I woke up this morning I thought it could go one way or the other. I could have a good day or a really bad day!

“The last few years have been awesome, but you’ve got to keep on improving and pushing more and more.

“I like riding under pressure, I feel with the better rides I got I like it more. I love riding horses, you’ve got to to do this job.”

Extra Elusive was a notable Group Three winner for Doyle in the early days of her association with owner Imad Al Sagar and Roger Charlton’s charge defied a penalty for that Haydock win in beating the odds-on favourite Fox Chairman by a length.

Doyle said: “I love him and I just feel really blessed at the moment to get my leg up on these types of horses — good horses.

“He settled so well today taking a lead, we went a nice, even gallop and in a nice rhythm. It probably isn’t his track or preferred ground to be honest, but he’s on the up.

“I just go with him and let him take me along. I don’t complicate things. He’s got bags of ability, he’s physically beautiful and he’d have no trouble getting 12 furlongs if he keeps on relaxing the way he has the last twice.

Charlton was full of praise for Doyle, adding: “I really pleased for him and for Hollie, it was a great ride.

“It wouldn’t be his choice of ground or his choice of track, but he did it well and I would say it’s the best performance he’s put up.

“Hollie is remarkable — he’s not an easy horse, he’s quite keen but she had him very settled there. The biggest work is carrying the saddle out for her, I think there must have been three stones of lead in there!

“I don’t know where he’ll go next as there are no more Group Twos for him and the only Group One is the Champion Stakes. The owner is keen to run him in the Saudi Cup on dirt. He’s a fun horse, who knows if he’ll like it.”

Doyle had earlier steered the Hughie Morrison-trained Le Don De Vie to a Listed triumph in the Gallagher Group August Stakes, coming home a length and three-quarters clear of Communique after he tried to make all.

Doyle said: “It was a muddling race and I was pretty lucky really to get my position as he can be quite keen, but I tracked Franny (Norton, on Communique) for the first half-mile and he managed to drop the bridle.

“When we went around the loop I lost my cover, but that helped as Franny tried to steady the race up and I knew that, so I just let mine slide along — he was just doing enough.

“He picked up well between the two and the three, he’s a smashing horse, he deserved to win today.”

Doyle also hit the mark on Indian Creak (3-1) for Mick Channon in the Luxury Lodges For Sale At racecoursemarina.com Handicap and Robert Cowell’s Sur Mer (11-4) in the MPM Flooring Fillies’ Handicap — meaning her five winners were also for five different trainers.