Condon adds Laws Of Indices tolist of Group One hopefuls

Two-year-old prospect made just €8,000 through the sales ring as a yearling 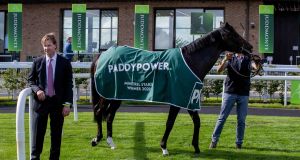 Ken Condon pictured with Romanised at the Curragh in July. Photograph: Morgan Treacy/Inpho

Curragh trainer Ken Condon has added the bargain buy two-year-old Laws Of Indices to his roster of Group One hopefuls for September.

Condon’s older star Romanised has this Sunday’s Prix Du Moulin at Longchamp in his sights, a race in which he was controversially edged out by Circus Maximus a year ago.

Romanised memorably secured his trainer a first Group One success in the 2018 Irish 2,000 Guineas and added to that a year later in the Marois at Deauville.

However the coming weeks will see Condon fire several other top-flight salvos.

A notably strong and inexpensively assembled juvenile team includes the Lowther winner Miss Amulet, who cost just €1,000 as a foal, and has Newmarket’s Cheveley Park Stakes on September 26th as a target.

Thunder Beauty has won just a maiden to date but is in line to take a shot at the Curragh’s Moyglare Stud Stakes over ‘Irish Champions Weekend.’

Condon has also confirmed the Railway Stakes hero Laws Of Indices will also line up on Sunday week in the Goffs Vincent O’Brien National Stakes.

Laws of Indices made just €8,000 through the sales ring as a yearling but belied the odds again when beating Lucky Vega at 66-1 in the Railway last month.

He was subsequently only fourth to that colt in the Phoenix but Condon is happy to renew rivalry.

“It’s shaping up to be a very good race. But he ran very well in the Phoenix having been a bit slowly away. The winner was very good on the day - (but) we were happy with how he ran and he finished out the race very well,” he said on Sunday.

“He doesn’t seem to be ground dependant so that’s good but he remains in good form and looks very well so he’ll probably take his chance in the National Stakes and we’ll go from there,” Condon added.

Future options for Laws Of Indices could include both the Prix Jean Luc Lagadere and the Criterium International in France while a trip to Keeneland for the Breeders Cup in November hasn’t been ruled out either.

Before that connections are hoping Romanised gets another shot at the Moulin for which he is currently an 8-1 shot with some firms.

The top of the betting is dominated by the three-year-olds Pinatubo and Palace Pier who had Romanised behind him in the Marois earlier this month.

On Monday Shane Foley continues his trek towards becoming champion jockey for the first time with a handful or rides at Roscommon.

The 32-year-old classic winning rider, twice runner-up for the apprentice title in 2009 and 2010, is a 1-4 favourite with Paddy Power to land the championship when the season ends on November 7th.

Thanks mainly to his position as first jockey to Jessica Harrington, Foley has already reached 60 winners for the campaign.

That’s 14 ahead of Wayne Lordan while the former champion Colin Keane is on 45 winners. The 2017 champion is rated Foley’s biggest threat with over two months still to go and is 3-1.

Both Foley and Keane head west on Monday hoping to add to their tallies.

Foley’s best chance looks to be Lady Anner, a full sister to Keane’s first ever Group One winner Laganore, who goes in a maiden and should be fine on very testing ground.

There is no doubt about the conditions for Keane’s mount Mean Fomhair in a later seven furlong handicap.

Keane teamed up with his father, Gerry, to land Friday’s Cambridgeshire at the Curragh with Laughifuwant who thrived on soft going.

Mean Fomhair, ironically a full sister to Foley’s 2016 Irish 1,000 Guineas winner Jet Setting, won on heavy over this course and distance a year ago.

She was runner-up on her return to action over the same course and distance earlier this month and is favoured with an inside draw.

With a UK Bank Holiday on Monday there is also a programme at Downpatrick where Bective Cave looks weighted to finally win over fences.

The veteran has won half a dozen times over hurdles including off a mark of 114 at Kilbeggan last month.

Bective Cave may not be as good over the larger obstacles but with a 97 rating, and Danny Mullins riding for the first time, this could be his chance.