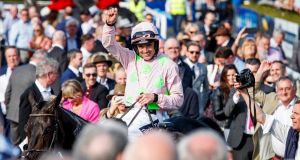 The 2020 Boylesports Irish Grand National has been cancelled, with racing’s top official admitting that running Ireland’s most valuable steeplechase behind closed doors would not have felt right.

Due to the impact of the coronavirus pandemic it is just the third time in its 150-year history that the National will not be run. It was also cancelled in 1919 and in 1941 due to the second World War.

Fairyhouse’s traditional Easter Monday highlight was originally scheduled for April 13th, but became an early casualty when racing was axed in March as part of the Covid-19 lockdown.

At the time Horse Racing Ireland (HRI), which owns Fairyhouse, declared it wanted to stage the race later in the year, potentially as part of a restructured “winter festival” at the end of November.

There was criticism of that policy, including from top jockey Robbie Power, who in a blog for the National sponsor said the race belongs to “one day and one day only, and that is Easter Monday”.

HRI’s chief executive Brian Kavanagh countered by describing the National as “unique”, and arguing that its €500,000 prize fund needed to be spread into the system.

However, with no end in sight to the Government policy of keeping sport behind closed doors, HRI confirmed on Friday that there would be no Irish National this year.

“You need some certainty about crowds. I’m not saying there won’t be people at the races at that time of the year. But in order to plan, promote and push a Grand National, you need certainty, which we just don’t have.

“We wanted to stage the Grand National. It’s a big race for Co Meath and racegoers and fans, and at the time we didn’t want the year to miss the Irish National.

“But as things have moved on it became likely that we’re still going to have restrictions come the end of November in terms of being able to advertise a race meeting. There is no clarity around that at the moment. It wouldn’t feel right to be running a Grand National with empty terraces,” said Kavanagh.

An official attendance of 12,500 watched Burrows Saint win the marathon contest in 2019.

In a statement Boylesports said it was committed to sponsoring the National up to 2024.

Friday’s cancellation means there will be prize money increases to two of the winter’s big staying handicap chases. The Ladbrokes Troytown at Navan will be worth €25,000 more, and the value of the Bar One Porterstown Chase at Fairyhouse jumps from €50,000 to €125,000.

Racing is approaching its 12th week of being staged behind closed doors since the sport resumed here on June 8th.

Cancelling the National three months in advance of any potential rescheduling date suggests significant change in that situation is unlikely any time soon.

Last month it was confirmed that both the upcoming Listowel Festival and “Irish Champions Weekend” would take place behind closed doors.

“We are in the hands of what is happening nationally,” Kavanagh said on Friday. “It’s not just the Government. It’s also the way the national mood moves.

“A couple of months ago we were moving through the phases quite well, and there was hope gatherings of 500 would be possible by August 10th. But then it went back to restrictions being tightened. So it is very difficult in such circumstances to make any plans.

“Our objective remains to run racing in a safe environment. To do that we’ve had to strip it back to its bare necessities.”

One of the latest health protocols introduced on racecourses is the requirement for those essential personnel that are allowed on-site to wear face masks both indoors and outdoors.

Top trainer Ger Lyons has pointed to that as evidence of an at times “over the top” approach by racing officials.

“We are now wearing masks outside to keep the show on the road, which is perception: I think it’s nonsense,” he said on Friday. “I have no problem wearing masks inside. But wearing them outside is doing it for the wrong reasons.”

Lyons also said racing had proved its capacity to be staged safely, but added that the sooner it returned to some kind of normality the better.

However, Kavanagh said the view of both HRI and the Irish Horseracing Regulatory Board (IHRB) has been to err on the side of caution when it comes to Covid-10 protocols.

“There are a number of people at race meetings who are both indoors and outdoors on the same day, and wearing masks all the time is easier to administer. We have been prudent in the way we’ve approached this.”

Ahead of “Champions Weekend” and a glut of international Group One action in September, this weekend sees a comparative lull, with a rare blank Sunday in Ireland.

On Saturday, Joseph O’Brien has both Galileo Chrome and Degraves in Navan’s Listed Yeats Stakes, and the latter’s proven ability on heavy ground could prove decisive.

O’Brien’s Us And Them has won just once in 15 starts over fences to date. However, two miles on deep ground may see him get his head in front in Wexford’s conditions chase.