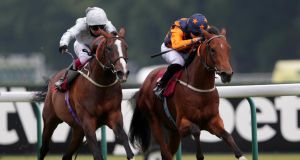 Devious Company (right) is one of three cross-channel raiders lining up in the inaugural €320,000 EBF Ballyhane Stakes at Naas on Sunday. Photograph: David Davies/Pool via Getty Images

The richest race in Europe this weekend will be the inaugural €320,000 EBF Ballyhane Stakes at Naas on Sunday.

This hugely lucrative pot is the most valuable two-year-old contest in Ireland this year and presents a rare opportunity for some relatively inexpensive purchases to hit the financial bullseye.

A total of 20 horses will line up in a race designed for animals who are by sires with a median price of under €75,000 at last year’s yearling sales. It will be one of two races from Naas shown live on ITV3.

Joseph O’Brien has three lining up for a heat due off at the same time as his filly Bolleville takes her chance at the highest Group One level in the Darley Prix Jean Romanet at Deauville.

O’Brien also has a big overseas prize in his sights on Saturday with Pondus joining Willie Mullins’s True Self in a two-pronged Irish raid on York’s Ebor Handicap.

However, even that historic handicap has to concede the financial spotlight to Naas.

The value of the Ballyhane Stud sponsored race was boosted from €200,000 last month after a record number of entries. That also prompted a €80,000 consolation contest for those who failed to make the cut for the big race.

With €150,000 to the winner, and even the final five horses to finish getting €2,000 each, it’s little surprise travel restrictions haven’t stopped a trio of cross-channel hopes making the trip.

They include the 107-rated Devious Company who was runner-up in another sales race at York on Thursday.

However for a concept designed to increase competition, and encourage investment at a lower level, there could be an appropriate winner in Measure of Magic.

That pair clashed again subsequently in the Marwell Stakes where Measure Of Magic indicated that off just 8.9 she should be a major player on Sunday.

The other Naas race shown live on ITV will be the Group Three Irish Stallion Farms Stanerra Stakes.

Aidan O’Brien runs two fillies placed in a couple of Classics, Ennistymon and Passion, although Dermot Weld’s older filly Kastasa has won her last five and still looks to be progressing.

Jessica Harrington has a starter at Deauville on Saturday as the wide-margin Roscommon winner No Speak Alexander takes her chance under Frankie Dettori in the Group Two Prix Du Calvados.

She also has chances in both of the Curragh’s Group Two juvenile highlights on Saturday including Cadillac, who lines up in the Galileo Futurity.

This one won his only start by nine lengths in a Leopardstown auction maiden but takes a big step up in class here.

Harrington won the Futurity back to back with Pathfork and Dragon Pulse (2010-11) although it is Aidan O’Brien who is pursuing a 14th win in all with three runners.

Séamus Heffernan is on the maiden Van Gogh who was a neck behind his stable companion Military Style in the Tyros last time.

O’Brien’s son Donnacha has Southern Cape in the Futurity and will saddle his Silver Flash winner Shale in a competitive looking Debutante Stakes.

There doesn’t appear to be any obvious reason why Shale can’t confirm that Leopardstown form with some of her rivals given she can also boast proven winning form on soft ground.