Fairyhouse showpiece has been cancelled with prize money boosting other races 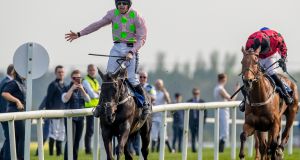 Plans to stage the 2020 BoyleSports Irish Grand National in the autumn have been abandoned.

The showpiece event was due to be run at Fairyhouse on April 13th, but was called off when racing was put on hold in Ireland on March 24th due to the Covid-19 pandemic.

Horse Racing Ireland had initially intended to reschedule the race as part of an enhanced National Hunt programme later this year, but a number of factors have combined to mean that will not happen and it is hoped the decision will give trainers “as much certainty as possible in relation to the preparation of their horses”.

Both the Ladbrokes Troytown at Navan on November 8th and the Bar One Porterstown Handicap Chase at Fairyhouse on November 29th will now receive a boost in prize money.

Jason Morris, director of racing at HRI, said: “The decision not to run the BoyleSports Irish Grand National was made to give owners and trainers as much notice as possible, and allows connections firm up their plans for the winter with some certainty.

“We feel it is appropriate to increase our support to two complementary staying handicap chases in November, and so the Ladbrokes Troytown Chase at Navan on November 8th and the Bar One Portertown Handicap Chase at Fairyhouse the week after, will both become races worth €125,000.”

Peter Roe, Fairyhouse’s general manager, added: “The Irish Grand National is known by many as the ‘People’s Race’ so to stage the race at Fairyhouse without that huge community of locals and racing fans, just wouldn’t feel the same.

“I know that the race will return as big as ever in 2021 and would like to sincerely thank BoyleSports for their loyal support of the race.

“I’m delighted to see that the Bar One Porterstown Handicap Chase, which features on an incredible day’s racing here on November 29th, with three Grade Ones alongside it, will benefit from a prize-money boost.”