Wimbledon: players move or perish as seeds begin to collide 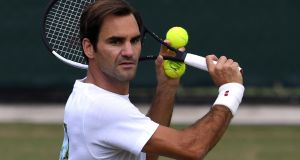 Roger Federer during practice ahead of his match with 22nd seed Adrian Mannarino. Photograph: Tony O’Brien/Reuters

If there is such a thing as moving day in tennis as in golf, the beginning of the second week of Wimbledon could be it.

With five of the top 10 men’s seeds playing in the round of 16 and three icons of the game Roger Federer, Rafael Nadal and Serena Williams occupying familiar ground on Centre Court and Novak Djokovic on Court One, players will move or perish as seeds begin to collide.

The defending champion Federer faces 22nd seed, Adrian Mannarino, a familiar face to Irish tennis. It was the French player who won a dramatic five-set match against Ireland’s Conor Niland at Wimbledon in 2011.

Niland led the match against Mannarino before narrowly missing out on a dream encounter with Federer in the second round on Centre Court falling 4-6 6-4 7-6 (9-7) 4-6 6-4.

Mannarino advanced that year only to lose to Federer as he has done four times since with the top seed holding a 5-0 advantage in the head to heads. The eight-times Wimbledon winner has lost just one set to Mannarino in those meetings.

The pair are two of the eight players aged 30 or over to reach the round of 16 of the men’s singles this year, which equals the Open Era record for most 30-somethings through to the round of 16 at a Grand Slam.

Djokovic and Nadal are all contributors to that, probably unwelcome record, with Djokovic taking up the mantle over the weekend as Brit slayer before meeting Russia’s Karen Khachanov today.

The euphoria of football in Samara travelled well to SW19 but fell on the deaf ears of Djokovic, the result falling short for Kyle Edmund, the last Briton in the draw male or female. Is it possible there could be any more pressure on Gareth Southgate for national sporting redemption?

Nadal takes the evening shift against Czech player Jiri Vesely, who faces the Spaniard’s scorched earth policy. It took Nadal just over two hours to defeat 19-year-old Australian Alex de Minaur in a match brutally called slaughter in the sun. Vesely is ranked in the 90s and has never got past this round before.

Kevin Anderson, who is 32 years old, John Isner who is 33, Gael Monfils, who is 31 and Gilles Simon who is 33 all hope to survive and see one or some of the big-three names toppling to clear the way.

In contrast, the women’s draw has bled seeded players like no other Wimbledon and although Williams was given a lowly number, she is still the player to beat.

Of the top 10 seeded players in the tournament, only the seventh seed Karolina Pliskova has survived into the second week.

That may be encouraging for the Czech player but she has never previously gone beyond the second round and whether vertigo takes hold or not may determine whether this will be Pliskova’s most blessed of runs at Wimbledon.

She faces Dutch player Kiki Bertens, seeded 20. As results have shown so far that doesn’t really count for much this year.

Williams would definitely feel that is not an untruthful statement. As she tears up Wimbledon as only she can with her big game, the only question hovering in the air is: how long will she last?

Not in the best physical condition of her tennis life but since when did any sort of normal analysis ever apply to Serena, who has fallen sweetly into mother mood all week.

In between the oohs and the ahhs and the gurgling noises, heads have been stuck on pikes. She missed her daughter Alexis Olympia’s first steps practising for this tournament. Somebody has got to pay for that. She plays the unseeded Russian Evgeniya Rodina. America versus Russia always works.

But amid all the ifs and buts and beaten seeds, there is a red-haired, gay Belgian player called Alison van Uytvanc still alive in the draw.

Being gay in tennis is not exceptional but coming from nowhere, well 47 in the world and knocking out the defending champion Garbine Murguruza has drawn attention to the 24-year-old. Last Thursday van Uytvanc spoke about coming out and again after reaching the last 16. She has encouraged other young people to do the same.

What was the reaction, she was asked after beating the 28 seed Anett Kontaveit 6-2, 6-3 to get into the second week for the first time.

“Very positive,” she said. I literally got not one negative response. So it’s good.”

Reasons to be cheerful all round.

1 Gordon D’Arcy: Change was advisable before Twickenham; now it is inescapable
2 Gerry Thornley: Wild reactions to this Ireland team as fickle as the wind
3 Mayo return focus to the pitch after breaking from Tim O’Leary
4 Bayern Munich teach youthful Chelsea a European lesson
5 Munster were fever-tested when they arrived in Italy
Real news has value SUBSCRIBE

Mayo return focus to the pitch after breaking from Tim O’Leary 06:00
Dutch duo on ‘a mission’ to get Ireland to Euro championships 06:00
Kevin Seaward: ‘The first time I wore the Vaporflys, I hated them’ 06:00
Peter Dooley aiming for Ireland caps and beyond 06:00
Gordon D’Arcy: Change was advisable before Twickenham; now it is inescapable 06:00
Here is your handy guide to sport on television this week