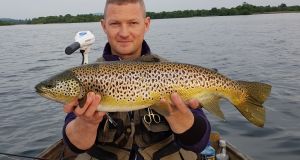 Anglers and the general public are being asked to report any sightings of distressed fish caused by high water temperatures and low water levels, and to voluntarily cease using keep nets during this period to avoid causing distress to fish kept for long periods.

Landowners, industry and farmers are also being reminded that silage effluent or sewage discharges can result in pollution incidents and fish kills.

IFI’s chief executive, Dr Ciarán Byrne, said: “Temperatures are dangerously hot at the moment and fish kills may be unavoidable. We would ask anglers practising catch and release to consider taking a break from fishing entirely.”

Meanwhile, IFI and the Office of Public Works (Flood Risk Management Unit), have signed a new shared service agreement which will see them continue to work collaboratively over the next five years in the protection of fishery requirements while carrying out flood risk management investment activities.

The arrangement will focus on a series of scientific investigations to further understand environmental impacts of river maintenance works.

OPW’s John Curtin, said: “This agreement is a proactive one in terms of delivering environmental gain, while still balancing the drainage/flood relief functions for our communities and demonstrates how two public authorities working in partnership can achieve more that the organisations could working individually.”

On Sheelin, the majority of catches happened late into the night and the first hour after dawn, according to fisheries officer, Brenda Montgomery. The mayfly is still in evidence but preferred the shoreline bushes with only a scattering of spent going out late on some evenings.

After the mayfly, anglers should see the appearance of ‘the pinheads’, shoals of tiny roach and perch fry which are dominant the shallows around Orangefield, Plunkett’s Point, along Derrysheridan and into Goreport.

The biggest fish for June was caught by Scottish angler Mark Lough at 68cm on a spent pattern. Total number of trout recorded for week-ending July 1st amount to 23.

A last minute booking is available for a rod at half-price on the River Hofsá, Iceland from 14th-22nd July. To avail of this special offer, contact info@frontierstravel.com as soon as possible.