O’Donovan brothers no match for British heavyweights at Henley 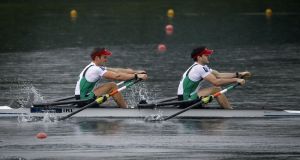 Gary and Paul O’Donovan were beaten by British heavyweights Angus Groom and Jack Beaumont in the final of the Double Sculls at the Henley Royal Regatta. Photograph: Inpho

Rowing off the Buckinghamshire station, where steering can be especially difficult for coxless boats, the Skibbereen men had an explosive start. But once the two crews settled into the long middle of the 2,112-metre course, Beaumont and Groom looked stronger. The O’Donovans moved at the half-mile marker and did make some progress – but their steering suffered, and twice the umpire had to shout at them to alter their course.

From there, the Britons were in control. They may be the best heavyweight double in the world: they go into the third and final World Cup in Lucerne next weekend having won silver and gold in the previous two.

On Saturday, rowing on the Buckinghamshire station, they had looked ill at ease in their semi-final win over Norway’s lightweight crew of Ari Strandli and Kris Brun, while the O’Donovans were majestic in their win over Romanian heavyweights Ioan Prundeanu and Marian-Florian Enache.

In a brilliant final of the Diamond Sculls on Sunday, Olympic champion Mahe Drysdale won his sixth Diamonds title with a remarkable finish. Having trailed for almost 2,000 metres, the 39-year-old New Zealander overtook Norway’s Kjetil Borch (28) in the closing 200 metres.

Clonmel man Daire Lynch was the three man in the Yale crew which was beaten in the semi-final of the Temple Cup for college eights on Saturday.