Chris Froome cleared of any wrongdoing in adverse drugs test 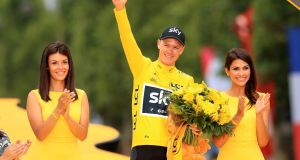 Cycling’s world governing body the UCI has announced it has closed its case against Chris Froome. Photograph: PA

Chris Froome has been cleared of any wrongdoing by world cycling’s governing body, the UCI, after an adverse drugs test.

The announcement comes just one day after French media reports that Tour de France organisers were seeking to block Froome from riding in this year’s race.

Froome is now free to chase a fifth Tour title, with the race due to start on Saturday.

A drug test on Froome during last year’s Vuelta a Espana found a larger than permitted dose of the asthma drug salbutamol in his system.

In a statement on Monday the UCI said: “The Union Cycliste Internationale (UCI) confirms that the anti-doping proceedings involving Mr Christopher Froome have now been closed.”