Sue Barker pulls up Boris Becker for swearing on air 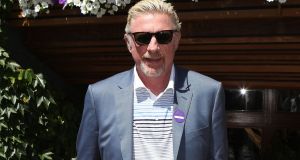 Boris Becker arrives on day one of the Wimbledon Championships on Monday. Photograph: Philip Toscano/PA Wire

Boris Becker was told to curb his language by presenter Sue Barker after swearing on air during the BBC’s Wimbledon coverage.

The German, who won the Wimbledon men’s singles three times in the 1980s, was in conversation with Barker and nine-time women’s champion Martina Navratilova.

Before play got under way, Barker invited Becker to explain the events that have seen him make headlines recently.

The former world number one was declared bankrupt in June 2017, but has recently asserted his right to diplomatic immunity following his appointment as an attache for the Central African Republic.

Navratilova suggested Becker wanted to not have to wait in line at passport control.

Becker, in high spirits, said: “That’s one of the things my friend told me – ‘You bastard, you don’t have to wait in line now’.”

She followed by added: “Watch your language from now on.”

Becker realised his error and said: “Excuse me, I’m sorry.”

He said: “I was asked by the ambassador of the Republic of Central Africa [sic] at the beginning of the year whether I want to get involved on a diplomatic level to help the country get back on its feet, as an attache for sports, culture and human efforts and I was honoured.

“I met the president – His Excellency Mr [Faustin-Archange] Touadera – in Brussels and in Paris a number of times and they gave me official documentation, they gave me a passport.”

The authenticity of his passport has been questioned by Central African Republic officials, Becker added.

“Unfortunately the foreign ministry made some comments about it [being a] false passport,” he said.

“So I asked the same questions because I’d like to help the country and I was asked by the president, I was asked about the ambassador, and I’m sure the president will find a solution very soon.”