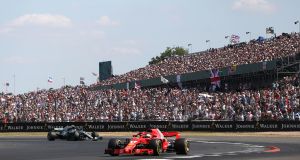 Sebastian Vettel won the British Grand Prix, with a commanding performance from second on the grid. Lewis Hamilton’s hopes of a home win were dashed on the opening lap when he had a slow start and was then hit by Kimi Räikkönen and dropped almost to the back of the field. He drove a remarkable recovery, however, to finish in second place but it means Vettel now has an eight-point lead in the championship. Räikkönen was in third with Valtteri Bottas in fourth.

This is Vettel’s second victory at the British Grand Prix, having won for Red Bull in 2009. His 51st career win is his fourth this season, one more than Hamilton has scored and a real achievement in denying the British driver and Mercedes at the circuit that has been their personal fiefdom for the past four years.

Mercedes have not been beaten at Silverstone since the turbo-hybrid era began in 2014 with Hamilton winning all four races and they were expected to have a further advantage in Pirelli using the thinner-tread tyres here that suit their car so well. Yet the Scuderia played to their strengths and executed perfectly to end their hegemony.

The title race remains finely balanced but Ferrari will take great encouragement from victory at a circuit where Mercedes had the upper hand. Their form here once more suggests they have a supremely well-balanced car that is strong at an increasing variety of circuits, it also works its tyres well and they have concluded the final leg of F1’s first triple header with a formidably strong package.

Hamilton, on pole, was well-beaten off the line by Vettel and had been forced into third by Bottas though the first corner but worse was to come. He was clipped into a spin by Raikkonen who locked up going into turn three and the British driver dropped to 18th place. Raikkonen was given a 10-second penalty for causing a collision but the damage had been done.

Hamilton’s race became one of damage limitation. He had made it up to 14th by lap three and was into the top 10 by lap six. Vettel, however, made the most of it out front and had a four second lead on Bottas by that point.

The home crowd roared their approval every time Hamilton claimed a place back and they were kept in good voice. He had passed Sauber’s Charles Leclerc for seventh by lap 10 but he was a full 27 seconds down on Vettel by then.

Having passed the midfield, the real task was ahead. Hamilton pumped in a sequence of quick laps staying out long on the soft rubber and he was the last of the front-runners to pit on lap 25 taking the medium tyres, emerging behind Raikkonen in sixth, 10 seconds back from the Finn.

On lap 32 Marcus Ericsson crashed at Abbey, bringing out the safety car, which allowed Hamilton to close up on the leaders. Ferrari, struggling with tyre wear, immediately pitted both their drivers for fresh rubber but Mercedes kept Hamilton and Bottas out, gaining track position. When racing resumed after six laps, Bottas led Vettel from Hamilton.

The race had barely restarted when Carlos Sainz and Romain Grosjean came together at Copse and the safety car was deployed once more. Racing restarted on lap 42 and Vettel immediately charged at Bottas and they went wheel to wheel, the Finn defending brilliantly as did Hamilton with Raikkonen snapping at his heels, the four were line astern in a mighty battle Vettel finally retook the lead with a brilliant move up the inside at Brooklands on lap 47, enough for him to secure the win. Hamilton passed Bottas for second a lap later, the Finn struggling with a lack of grip that saw Raikkonen also take third from him.

McLaren, who announced they are restructuring their team last week, after going through the worst run in their 52-year history, had not expected any great improvement at their home race. They will be pleased with Fernando Alonso’s eighth place with his team-mate Stoffel Vandoorne in 12th.

Williams, who are also enduring a terrible season with an uncompetitive car, struggled all weekend. Both Lance Stroll and Sergey Sirotkin started from the pitlane having opted to change their rear wings after qualifying because of the aerodynamic problems they were having. They were the last of the finishers in 13th and 14th places.

Red Bull’s Daniel Ricciardo was fifth but his team-mate Max Verstappen was forced to retire with a gearbox issue. Renault’s Nico Hülkenberg was in sixth, in front of the Force India of Esteban Ocon. Kevin Magnussen’s Haas was in ninth and the Toro Rosso of Pierre Gasly in 10th. – Guardian service