All or nothing as Andy Murray pulls out of Wimbledon 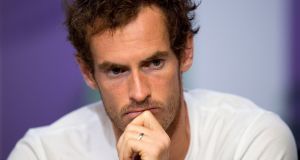 In the end there was simply too much uncertainty for Andy Murray to play Wimbledon. Photograph: Joe Toth/PA

Andy Murray’s decision on Sunday night to pull out of Wimbledon, which starts on Monday – his third last-minute withdrawal from one of the majors since losing in the quarter-finals here a year ago – has left tennis fans bewildered but he is adamant he has made the right decision.

The two-times Wimbledon champion explained he did not think he had a realistic chance of winning the title and he was unsure if he could survive a five-set match.

The Scot, who has just turned 31 and is nursing a chronically sore hip back to full fitness, will now prepare for another charge at the US Open in September. The hip he had reshaped in a Melbourne hospital on January 8th has healed to his satisfaction, he says, but he needs assurance still that he is capable of surviving in the heat of elite competition.

His decision came only 24 hours after he said he was ready and keen to play, if he suffered no after-effects of recent matches and training sessions.

He explained on Sunday night that he had long discussions with his back-up team and one of his medical advisers, Dr Bryan Walsh, before changing his mind.

“I didn’t know how I was going to respond to playing five-set matches,” he said. “I went through a similar situation last year when I went into Wimbledon. I didn’t feel good before [the tournament] last year but decided to play. I know how that ended up [he lost in five painful sets in the quarter-finals to Sam Querrey and quit the Tour for the rest of the year].

“There was a bit of that in the back of my mind as well. I was thinking: ‘Let’s make sure I don’t make a mistake. I’ve made progress in the last month, which hadn’t really been the case for the [PREVIOUS]10 or 11 months. I was going in the right direction.’ [NOW]I’m putting myself in a situation that I haven’t been able to replicate in training or in practice recently – which is maybe a bit unnecessary to do at this stage.”

He added: “Normally when I am getting ready for Wimbledon and a couple of days out, I’m feeling nervous, stressed and excited. I didn’t really feel that way this time. I didn’t feel like I was going to win the tournament. There were just so many unknowns. It’s a very, very different mentality going into the event. They were all signs that it was maybe not the right thing to do.

“It’s been hard because I really wanted to play. Once you get back on the match court, you don’t want to be taking what feels like a step back in some ways. It’s also a positive in lots of ways that I got through the last couple of weeks. What I would not have wanted to do was play three or four matches, get through to the second week and feel terrible”

That was the perfectionist speaking. Essentially the spark and drive were missing.

The former world No 1 – who regards Wimbledon as his sanctuary and Centre Court his favourite place to play – clearly was an outsider at his home tournament but he arrived with low expectations and seemed happy just to be back on the Tour. Yet his competitive spirit would not let him go in underdone. It had to be all or nothing – something he surely realised way before his announcement.

Although he has played only three competitive matches since losing to Querrey – against Nick Kyrgios at Queen’s and Stan Wawrinka and Kyle Edmund at Eastbourne last week – he was hitting the ball with authority and seemed satisfied with his progress.

In a long and upbeat briefing on Saturday he had sounded content and confident. He wanted to play – and would do so, “unless in the next couple of days I wake up and don’t feel good”.

He did not practise on Sunday, which suggested he was having second thoughts – even though he was not scheduled to play his first match until Tuesday, against the Frenchman Benoît Paire, whom he had beaten in their only two meetings.

“I didn’t have any setbacks in practice. I didn’t come off a particular training session and feel bad. I was just reflecting on the last 10 days. It’s been a positive 10 days, two weeks. I decided to play at Queen’s. Considering the circumstances, I think I competed pretty well against the level of opposition that I was up against. Also in practices, it’s not like any of the guys have been killing me and I’ve been completely off the pace. I’ve been competitive against everyone that I’ve played against in practice.”

The match that put most doubt in his mind was the three-setter over two hours and 39 minutes against Kyrgios. “I know how I felt after the match. There was a bit of that in the back of my mind, thinking: ‘If I played a five-set match and it was four hours, how am I going to feel?’

“I feel comfortable with the decision because it is the right one for me at this stage, long term. If I was thinking I would not play Wimbledon again, it would be a different decision to make and obviously I would be out there and just playing to enjoy it and potentially play my last Wimbledon. But I want to play for a couple more years and hopefully be back competing at the top of the game.”

Yet, riddled with doubt and confirming his own worst misgivings, he revealed: “I will start practising on the hard courts from tomorrow and continuing with my rehab and recovery. I’m looking forward to the US hard-court season.”

This is the fifth tournament in seven that Murray has withdrawn at or near the last possible minute. Nursing a chronically painful hip – which required surgery in January – he pulled out of the US Open last September, the Brisbane Open over the New Year, the Australian Open and then, most recently, an ATP250 grasscourt tournament at Rosmalen in the Netherlands.

The only person who probably views the news positively is Paire. He plays the lucky loser Jason Jung, an American-born 29-year-old who plays for Taipei and is ranked 154 in the world – two places better than Murray but some way removed from him in ambition and ability.