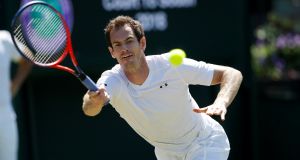 Andy Murray: decided he wasn’t ready to return at Wimbledon after a long absence due to hip surgery. Photograph: Peter Nicholls/Reuters

Hours before Andy Murray pulled out of this year’s championships, he spoke of the difficulty of coming back into a competitive tennis environment.

For the last year most of Murray’s conversation with the media has been about his body. The twice Wimbledon champion said it was “too soon” to play five-set matches after his comeback from hip surgery.

Murray returned at the Queen’s tournament last month after almost a year away from competition, losing to Australian Nick Kyrgios. He then played at Eastbourne, where he was beaten by Kyle Edmund.

The former world number one’s first and only reign at the top of the rankings ended last summer largely due to injury to his hip. He took the entire second half of the 2017 season off and, after attempting to play in Melbourne, finally settled on surgery, which has him where he is now.

“I spoke a little bit about it last week,” said Murray. “You know, in other sports when you come back, you don’t tend to come back and be competing against the best in the world immediately.”

Murray joined a growing list of Wimbledon MIA’s (Missing In Action). Last Saturday Ukraine’s Alexandr Dolgopolov also withdrew, citing a wrist injury. He joined a group that included Switzerland’s Timea Bacsinszky, who also pulled out on the Saturday, Chung Hyeon, of South Korea and Spain’s Roberto Bautista Agut, who withdrew from the tournament on the Friday before tennis began.

Coco Vandeweghe was a running wreck in her first round match last Monday. The strong serve of the American had powered her into the second week of Wimbledon for three consecutive years. But she struggled with an ankle injury and gamely lost, 6-7(3), 6-3, 8-6, to Katerina Siniakova then pulled out of the doubles event.

For that demonstration of playing beyond the pain threshold in her singles match, Vandeweghe will take home her entire loser’s pot.

Wimbledon officials had been noticing the frequency of injuries to players, who don’t make it past the first round and for a number of reasons have now changed their rules regarding prize money entitlement.

Dolgopolov was at the centre of controversy last year when he lasted only nine games against Roger Federer in the first round before retiring hurt.

On the same day and on the same Centre Court, Martin Klizan pulled out after eight games against Novak Djokovic. The optics of that on television with two of the top draws playing was not good.

The spate of retirements forced the All England club to revise the rules, which now means players who withdraw in the first round with a pre-existing injury risk losing all of their prize money.

For first-round losers this year that is €44,110, a sizable chunk of change for those lower down the pecking order. Four first round Grand Slam defeats a year would ensure a player ranked around 100 in the world, enough for direct entry into the draw of 128, a minimum of a six figure salary.

Injuries have become part of a changed game over a season that, in many critics’ eyes, is too long and a net contributor to breaking bodies. Over the last 25 years, Centre Court has become more an All England coliseum than a croquet club with durability becoming as much of an issue as a strong serve or forehand.

Five days ago Martina Navratilova spoke about injury and briefly about the difference between the tennis she played at the top into the 1990s and the tennis of today.

Commentating on BBC during the first match between Serena Williams and Arantxa Rus, the nine-times Wimbledon winner was asked about the longest spell she ever spent away from tennis because of injury.

The question arose as Williams had pulled out of Roland Garros last month because of a pectoral muscle injury and because of pregnancy and a pulmonary embolism earlier this year had been away from the game for over a year.

“I had knee surgery on both knees in 1990, in November and I made the Australian Open, ” said Navratilova. “And then I played right after that at the end of January or first week of February. So two months, three months maybe altogether.”

Sweet in an almost endless career.

Novak Djokovic, Rafa Nadal and Roger Federer have all been sidelined over the last two years for extended periods of time with Federer making the decision last year to cut the most gruelling of the Grand Slams, Roland Garros, entirely out of his playing schedule.

The reasoning was to preserve his body against injury as he approached his mid 30s.

Last year at the US Open five of the top 11-ranked players withdrew from the tournament due to injury, Murray, Djokvic, and Kei Nishikori among them.

Over a decade ago Andre Agassi’s borrowed phrase from the movie Top Gun was a prescient observation on how the game he played had changed further.

A number of reasons have been offered for the injuries to players from the change from wood to graphite rackets over 25 years ago which made tennis a game of strength and power to the way players now hit the ball.

The flat stroke is still alive in the game but the successful players such as Nadal and Federer flip their wrists to hit angled shots to create topspin, which makes a shot harder to return.

With lighter rackets, players also have to accelerate their arms more to generate the same amount of power. More acceleration, says doctors, increases the transmission of shocks and vibration from the racket to different parts of the wrists.

But perhaps the biggest issue is the length of the tennis season which in 2018 runs from the Hopman Cup beginning on January 1st and closes with the ATP finals and the Davis Cup final on November 19th, leaving little time for rest and recovery.

During that stretch the physically tough European clay season runs from the beginning of April to the first week in June climaxing with the French Open.

Many of the top 50 players come from hard courts to clay and after Roland Garros on to grass at the pre-Wimbledon events then back to hard court again in the run-in to the US Open.

They have in the past complained about the difficulty in adjusting to the different surfaces and the toll it takes.

At the moment in the men’s game, 36 ATP events are played on hard courts, 21 on clay and seven on grass. Add in the Grand Slam events of two hard court, one clay and grass, and the numbers are 38, 22 and eight.

But for many it seems as much how the players compete, especially the men, which makes the difference. There is a clip of one of the epic points played between Djokovic and Nadal in the 2013 US Open, where the baseline exchanges involve a 54 shot rally (55 counting the serve).

Both of the players are sliding into their shots on the hard court surface and, as awe-inspiring and competitive as it looks, the slides, common on clay, are not something players would have done 20 years ago.

Djokovic is retrieving the top spin shots of Nadal out on the wings and making it back to centre court. When finally the Spaniard finds the net Djokovic raises both of his arms in triumph, as if he had just won the tournament not one point.

The top players compete at that intensity all of the time even on grass, where the courts have been slowed down to allow rallies to develop.

“The tennis season is so long that there are arguments for stopping the season after the US Open, and finishing with a tournament like one of the Grand Slams perhaps makes sense,” said Murray.

That was in 2008, when he was fresh and winning and uninjured and just 21-years-old.

Djokovic’s elbow, Nadal’s knees, Federer’s back, del Potro’s wrist. . .now Murray’s hip. Maybe now the Scot, ranked 149 in the world, realises that back then he was writing cheques that his body is now trying to cash.