UCD win on the double to put pressure on second place 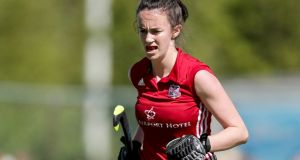 Two goals from Rebecca Barry sent Cork Harlequins on their way to a 4-2 defeat of Belfast Harlequins. Photograph: Laszlo Geczo/Inpho

The elements weren’t kind to most of the Hockey League competitors over the weekend, but Railway Union were left to rue the wintry conditions more than most, snow causing the abandonment of their game early in the second against Pembroke Wanderers on Sunday when they were leading 3-0.

That misfortune, combined with their 3-1 defeat by Pegasus on Saturday, sees Railway drop from fifth to seventh in the table, Pembroke and Belfast Harlequins overtaking them thanks to winning their Saturday games. Orla Macken converted the first short corner of the game to give Pembroke a 1-0 win at home to Cork Harlequins, while a Jenna Watt double helped Belfast Harlequins to a 4-1 victory away to Muckross.

Of the six sides who had two games over the weekend, only UCD took maximum points, their wins over Old Alexandra (4-0) and Ards (2-0) keeping them in third and moving them within four points of Pegasus, who trail leaders Loreto by another four.

Goals from Sarah Torrans and Siofra O’Brien gave Loreto the points against Ards on Saturday, ensuring they maintain that cushion over Pegasus – although the Belfast side and UCD have a game in hand. Cork Harlequins, five points behind UCD in fourth, had a mixed weekend: following their defeat by Pembroke, two goals from Rebecca Barry sent them on their way to a 4-2 defeat of Belfast Harlequins.