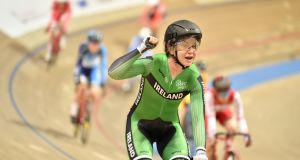 Irishwoman Lydia Boylan took the best result of her cycling career on Sunday in Poland, netting the silver medal in the points race at cycling’s world track championships.

Boylan took the third sprint in the 25 kilometre race, then followed that up by gaining a lap over most of her rivals. She was in the gold medal position with five laps to go and while Australia’s Alexandra Manly was able to take four points in the final sprint and edge one point clear, Boylan scooped silver.

“It still hasn’t sunk in that I’ve finally done something on the world stage. It’s a big boost of confidence for me, for sure,” she said. “That sort of racing suits me, because I know I can just dig deeper – we push ourselves so hard in training.”

Boylan is 31 years of age and has ramped up her focus on track racing in order to target the 2020 Olympics. Her past results include three victories in the Irish road race championships, as well as a silver medal in the Madison event at the European track championships. Her result in Poland is the best yet.

“I kept taking a sneaky look up at the leaderboard, and I knew I needed to move up,” she said, speaking of the battle for the gold medal. “I moved up and I gave it my best, but the legs fell off a bit in the last couple of laps.” Still, landing the silver medal is a huge result for her. “I still can’t believe it.”

On Saturday she was ninth in the women’s Madison with racing partner Lydia Gurley. One day earlier, fellow Ireland teammate Mark Downey took bronze in the men’s road race.

The two results mark the first Irish medals in the world track championships since Martyn Irvine’s scratch race silver medal at the 2014 worlds.