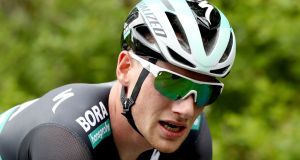 Irish sprinter Sam Bennett blasted to his second victory of 2019 on Saturday, beating many of the world’s best sprinters to claim the final stage of the UAE Tour in the United Arab Emirates.

The Carrick-on-Suir rider positioned himself perfectly inside the final kilometre, sticking on the wheel of the Colombian Fernando Gaviria, tracking him when he launched the sprint and then coming around him inside the final 50 metres.

“Our lead-out train worked perfectly today. The guys supported me the whole day and helped me to save extra energy,” said Bennett. “On the last sprint stage, I didn’t have good legs in the finale, but today I felt very good.”

Bennett previously finished sixth and fourth on sprint stages in the race. He took his first win of the year last month in the Vuelta a San Juan in Argentina, but was against tougher competition this week.

“The field is full of top-notch sprinters and to pick up a win against these guys is a great achievement,” he continued. “My win today gives me confidence heading into the next races, and I’m excited to see what I can do there.”

His Bora-hansgrohe sport director Enrico Poitschke said the team played an important role in setting Bennett up for the win on Dubai’s City Walk. “The strong winds made the stage more difficult, and the guys had to concentrate the whole day. Our goal was to bring Sam into a good position from which to launch his sprint in the last 500 metres. Then it was up to him to decide when to open up his final sprint.

“In the end, our plan worked perfectly. We are of course extremely happy with this result.”

Bennett’s compatriot Dan Martin finished 38th in the sprint, rolling in safely. He ended the week-long race in a fine seventh place overall, one minute 11 seconds behind overall winner Primoz Roglic (Team Jumbo-Visma). He is building towards the spring Classics, while Bennett is continuing to show he is one of the best sprinters in world cycling.