Equestrian: Ireland pipped by the USA after jump-off 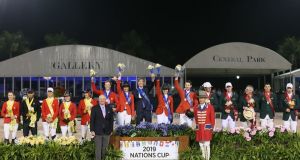 For the second year in succession, the Irish team finished as runners-up in Saturday night’s FEI Nations’ Cup at Wellington in Florida but a jump-off was needed to determine the winner, with Ireland and the USA tied on eight faults apiece following two rounds of jumping.

Derry’s Daniel Coyle riding the Ariel Grange-owned Farona and Co Down’s Lorcan Gallagher with Hunters Conlypso II, owned by the Dacantos Group, both jumped double clear rounds. Cork’s Shane Sweetnam and Spy Coast Farm’s Kirschwasser SCF finished with one fence down in the first round and eight in the second, while Limerick’s Paul O’Shea and the Tequestrian Farms-owned Imerald Van’t Voorhof finished with one fence down in both rounds.

This left Ireland tied with the USA on eight faults to set up a jump-off while Canada, who had shared the lead on four faults at the halfway stage, picked up nine in the second to finish in third place on a total of 13. Nine nations started.

Coyle was selected to go against the clock but accumulated 12 faults with Farona as McLain Ward jumped clear on Contagious to secure the win on home soil for the USA.

Lorcan Gallagher, who was competing in only his second senior Nations Cup, commented, “It’s a bittersweet night, but I’m very happy and proud with my own horse tonight and the American team was very competitive. We were all on horses that were competing in a Nations’ Cup for the first time.

“Obviously we are disappointed we didn’t get the win when we were that close. Each round, a couple of rails fell that maybe wouldn’t have another day, but it’s great to have this competition here for us and to see what the horses are capable of. We are building towards qualifying for Barcelona (the Nations’ Cup final) and for the European Championships to qualify for the Olympics. We still haven’t done that, so that is the main goal.”

Blake’s son David, who is based in the USA, partnered Pine Hollow Farm’s Keoki to finish third in the 1.50m national Grand Prix won by Switzerland’s Martin Fuchs riding Faberlys.

Earlier in the day in Doha, Qatar, Bertram Allen’s third place finish in the 1.55/1.60m speed class, the second Global Champions League competition at the five-star show, helped Valkenswaard United claim the runner-up spot in the opening round of the 2019 League.

In the class, Wexford-born Allen was one of 12 riders to go clear from a starting line-up of 47. He was home in 72.70 with Ballywalter Stable’s 12-year-old Belgium Warmblood gelding Harley vd Bisschop as France’s Ken Staut was fastest on Viking d’la Rouisserie (72.16) ahead of Britain’s Ben Maher on Explosion W (72.33).

Staut and Switzerland’s Pius Schwizer, who was also clear on Cortney Cox (78.63), were the League winners on a zero score over the two rounds for the Shanghai Swans. Allen’s Valkenswaard teammate, Frank Schuttert, had a fence down on Saturday with Chianti’s Champion to give them a two-round total of four in 149.65.