Pugilism, patriotism and a heavyweight bout in Civil War Dublin

Despite IRA threats, fans turned up in droves to see Mike McTigue win world title in 1923 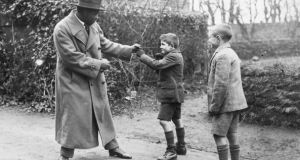 Boxing promoters are no mugs.

When it comes to putting punters’ bums on seats, they know what works. And few things help grease demand for ringside seats quite like the marriage of pugilism and patriotism. It’s a simple, yet irresistible combination.

Just look at the roll call of Irish boxing talent being billed for this coming St Patrick’s weekend on the far side of the Atlantic.

Topping them all is the peerless Katie Taylor in Philadelphia. But there’s also Michael Conlan at New York’s Madison Square Garden, where he is joined on the card by his friend and fellow Belfast Olympic medallist, Paddy Barnes.

As details of his American pro debut were being announced in January, an excited Barnes whooped for the media: “My name’s Paddy, my nickname’s ‘The Leprechaun’ and I’m fighting in New York on Paddy’s Day. Could it BE any more Irish?”

Paddy’s a man who clearly needs no lessons in marketer’s shtick and doubtless the diaspora at least will lap it up.

But the traffic of boxing talent has not always travelled in the one direction. Very occasionally the emigrant returns to do their best fighting on Irish soil. That’s certainly how it was for Clare-born and New York-based, Mike McTigue.

If the prize on offer wasn’t enough to mark the occasion out as special, then the circumstances in which it was held certainly did.

McTigue’s title tilt took place in city that was then in the throes of the Civil War war and with republicans opposed to the Anglo-Irish Treaty targeting sport and social life as part of a campaign to highlight the executions and mistreatment of IRA prisoners by the new Free State government.

Just three days before St Patrick’s Day, indeed, the anti-treatyites issued a proclamation ordering an indefinite period of ‘national mourning’ during which all forms of amusement, entertainment and sport were to be abandoned.

To the manager of the La Scala theatre, venue for the big fight, the threat was delivered in the form a handwritten circular from the Officer Commanding the Dublin Brigade of the IRA.

Did the boxers know the risks they were running?

The answer is yes – but only to a point. Armed guards, after all, were detailed to remain close by their sides and policemen ran behind them as they pounded the pavements on their training runs.

There was, however, no attempt to have McTigue or his opponent, the defending World and European champion, Senegalese-born ‘Battling’ Siki – he’d been born Ahmadou M’barick Fall – hidden from public view.

The Clare man took up residence in the Spa Hotel in Lucan, but he travelled freely out to Leopardstown races where his appearance, square jawed and attired in a long leather coat, brought to the track a sprinkle of Irish-American stardust.

For the 24-year-old Siki, who had stunned the boxing world when dethroning the French hero Georges Carpentier in Paris the previous September, Howth provided his base.

In the country as it was, he cut quite the exotic figure. Speaking barely any English, the Great War veteran with the carouser’s reputation charmed reporters with his accessibility and easy manner and they wrote admiringly of his athleticism and magnificent physique.

“He reminds one of a tiger, with his powerful torso and lithe movements.” observed one. The racial overtones, constant throughout Siki’s career, were barely disguised. McTigue himself addressed the race issue.

“I do not think a coloured man is harder to beat than a white man, and I may claim to know what I’m talking about, because I have fought 30 or 40 of them.”

Interest in the fight was considerable.

The Pathé newsreel company tied up exclusive film rights to the bout and to footage of the fighters in the build up. Newspapers, meanwhile, scrambled for accreditation. Over 300 applications for press passes were received from titles serving readers in France, the UK, the United States and Italy.

Given this international profile, it was no wonder the IRA wanted to disrupt the event and the State to safeguard it. The Civil War war may have been in its final phase and heading towards only one conclusion – the defeat of the anti-Treaty forces – yet there were still propaganda battles to be won by either side.

With that in mind, on the morning prior to St Patrick’s Day, the Dublin Brigade of the IRA upped the ante: they reissued a warning to the manager of the La Scala Theatre demanding its closure and threatened that the consequences of defiance would be ‘serious’.

This was no mere bluff on the IRA’s part. As events would subsequently demonstrate, they were more than willing to follow through on written threats by forcibly closing down theatres in the city.

On the night of the McTigue-Siki title fight, indeed, a land mine was exploded in a lane at the rear of the Pillar Picture House which ran from Henry Street to the Rotunda Hospital. The city centre shook from the force of the blast, the tremors felt by a panicked fight crowd gathered outside the nearby La Scala, the venue already fortified by barricades protected by police and Free State forces. The Freeman’s Journal speculated that the mine had been intended to damage cable wires supplying power to the La Scala and being used to relay news of the fight to the world.

It failed in that purpose. And the IRA failed to stop the fight.

La Scala’s proprietors had been given a ministerial promise by Kevin O’Higgins of “ample protection” with “armed plain clothes men, both inside and outside the Theatre” – and that’s what they got. Entrance to the theatre was by ticket only and everyone entering was frisked for firearms.

Those doing the frisking were officers from the police’s criminal investigations department, described by one reporter as “‘unpleasant-looking young men” whose pockets “bulged” with weaponry. Whether or not the entourages of the two boxers were searched was unclear, though it was understood that they too had brought their own armed protection.

In the end, after all the security fears and the pre-bout hoopla, the fight failed to live up to its billing. It ran the full 20 rounds but there was, as one reporter lamented, a “monotonous similarity” to them all and they contained none of the “‘thrills” typically associated with contests of such importance.

For the home crowd at least, it delivered the right result – an Irish victory in the Irish capital on Ireland’s national feast day. What’s more, McTigue became the first Irishman to win a world title on Irish soil. As his triumph was being conveyed to crowds still gathered on the streets outside the theatre, the exhausted new champion had his battered hands dressed by Dr Patrick McCartan, the ex-Sinn Féin TD who had reluctantly thrown his support behind the Treaty.

Siki, too, was sore. And seething.

Although generous in his remarks about the Irish hospitality he received, he railed against what he saw as the partiality of the refereeing and swore to never again box in a foreign ring.

For both men, that St Patrick’s night at La Scala marked an ending of sorts. Siki did fight again in a foreign ring when he moved to the United States, but he never regained his lost titles. And in December 1925, just over two years after he escaped Civil War Dublin, his body was discovered, with a bullet in the back, in a street in New York’s Hell Kitchen’s.

McTigue, too, headed for New York – for him, a return – where he lived out the remainder of his life. He was almost 40 before he hung up of his gloves but nothing that came after that St Patrick’s night in Dublin came close to equalling it. He died in 1966, poor, in a mental institution and with no memory that he had once been champion of the world.

Mark Duncan is a sports historian.

FAI to allow Limerick apply for licence to play in First Division 21:51
Welcome to Iten in Kenya – home of champions and cheats 20:00
Latest weekend Premier League team news 19:15
Centuries from Pope and Stokes put England on top of things in third Test 18:49
Ireland under-21 international Connor Ronan joins Blackpool on loan 18:03
Here is your handy guide to sport on television this week