Dave Hannigan: Taylor has little to fear from Volante in unification bid

America at Large: Too many women with poor records somehow fighting for world titles 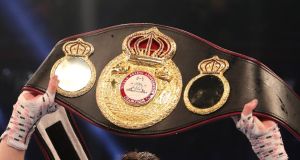 Rose Volante is the fifth-ranked lightweight boxer in the world, holder of the WBO version of the belt in that division, and somebody with a professional record of 14 wins from 14 outings.

Over the next couple of weeks, the hype machine will kick in ahead of the Brazilian’s March 15th showdown with Katie Taylor at the Liacouras Center in Philadelphia.

Much will be made of the fact that three different titles will be on the line in a unification bout and, stop me if you think you’ve heard this one before, there will be inevitable talk of the woman from Bray facing her toughest challenge yet.

It’s difficult to envisage that being the case when you examine Volante’s resume, an undistinguished jotter containing a raft of curious entries that make her current world ranking look rather risible.

Three of her 14 outings have come against people making their debuts, one of whom never fought again. Two more wins came against women in their second pro fights, and one opponent is listed in the official and usually exhaustive records as “unknown”.

Every fighter, male and female, pads their record on the way up. In boxing, it has been ever thus. But, even in a career where so many of her outings have been joke contests, what then to make of the bizarre case of Luana da Silva, a Brazilian kick-boxer who has twice been defeated by Volante?

The peculiarity is that Da Silva has never boxed anybody else as a professional. Her record stands 0 and 2. While their first meeting came in an unsanctioned show back in 2016, the second was in Santos just 18 months ago. And that was Volante’s last victory before taking on Brenda Karen Carabajal for the then vacant WBO crown.

Essentially, she warmed up for a title fight with a second round stoppage of a woman who has never climbed into the ring with anybody else. Ever. A strange, troubling anomaly that should render moot all ludicrous attempts by Eddie Hearn to convince us Taylor and Volante is somehow a clash of true champions.

Volante’s last defence of her title was back in September against Yolis Marrugo Franco, a Colombian journeywoman weeks away from her 42nd birthday.

More disturbing than Franco’s age is the fact her resume showed one single victory over an opponent with a winning record since 2012. Any objective analysis of the calibre of women she’s fought over the past decade reveals Franco had no business fighting for any version of any world title and, to the surprise of nobody, Volante ended it in the third round.

It will be quite a step up from facing the likes of Franco to facing someone like Taylor.

The dearth of quality opponents is destroying the credibility of the nascent women’s game, the talent pool being far too shallow to cater for so many rival versions of the various title belts. The men’s side of the sport has similar issues, just not as pronounced.

Twelve weeks after being embarrassed by Volante, Yolis Marrugo Franco climbed through the ropes for a shot at the WBO bantamweight title and, shockingly, Daniela Romina Bermudez stopped her in the fourth. Franco getting lined up to lose in quick succession like that bolsters the point made last year by John Sheppard, the sport’s record keeper, that there are too many titles for too few female fighters, 1870 available belts, 1430 active combatants. Do the maths.

Last April, Volante took on Lourdes Borbua, a Panamanian with an 8 and 0 record. On the surface that appeared like a legitimate, fair contest. Two unbeaten fighters scrapping for an edition of the world title. Yet, Borbua had never, not once, been in the ring with a woman boasting a winning record before.

Her eight victories came against what the sport has traditionally referred to as tomato cans – seven of her opponents had collected a total of five wins between them. What a shock then when she turned up half a stone overweight for the bout and retired after five rounds.

Undefeated records that are the result of careful matchmaking and slick management have always been a troublesome yet accepted facet of the promotion of boxing. What is different here is how many women with no proven track record or scarcely any history of credible opponents are fighting for world titles on a regular basis.

That Volante has spent her career almost exclusively besting never-weres (two more of her victories came against Maria Carino Brito who has one pro win since 2012) is not Katie Taylor’s fault.

However, over the coming weeks, it would behove her and her handlers to not portray “Queen Rose” as anything other than a 36-year-old woman flying in from Brazil to lose to a far superior fighter before collecting the biggest pay cheque of her career. To do otherwise would be to perpetrate a fraud on fight fans in Philly and Ireland.

Four weeks after Taylor-Volante, America’s two-time Olympic champion Claressa Shields meets the Kazakh Christina Hammer in Atlantic City. With all four versions of the middleweight title on the line, it’s being billed as the biggest women’s bout in history. That may or may not be true. It is certainly a clash between two fighters more or less on the same level and, unfortunately, in the distaff side of the sport, that remains the rarest of all things.