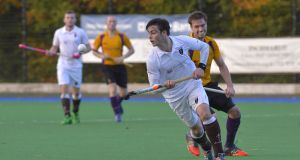 Glenanne’s Johnny McCormack in action for Avoca in 2015. The player scored the winner against Cookstown at the weekend to seal a 4-3 victory. Photograph: Inpho

Lisnagarvey ground out a big 2-1 win at Banbridge to turn the men’s EY Hockey League title chase into a three-horse race with precious little dividing that pair from Glenanne.

The Glens did move top of the pile when Jonny McCormack rescued a 4-3 result against struggling Cookstown at St Andrew’s on Saturday.

He guided home player-coach Joe Brennan’s brilliant cross to nick the win at the end of a rollercoaster in which Cookstown led at 1-0 and pegged the Glens back at 2-2 and 3-3.

And they looked in line for what would have been a key point for them before McCormack’s late intervention.

It was enough to lift them three points clear at the top but both Garvey and Banbridge have games in hand which would bring it all square if won.

Garvey’s young crew continue to improve and they made it five wins on the spin since Christmas as Andy Williamson and James Lorimer gave them a two-goal start against Banbridge, rendering Eugene Magee’s 70th-minute goal a mere consolation in a 2-1 result.

Three Rock Rovers started to close the gap to the playoff places with two strong wins over the weekend.

On Saturday, three final-quarter goals saw them pull clear of Monkstown with something to spare in a 5-2 success. Luke Madeley’s solo 60m effort was the pick of the goals to start the scoring and his second to make it 3-1 with 13 minutes to go was the killer blow.

A day later, they had few problems seeing off Cork C of I in a 4-0 result. That saw Munster’s only representative sit bottom of the table after they lost out 2-1 on Saturday to YMCA.

That was the YMCA’s second win in two weeks with Ross Henderson sliding home the winner in the third quarter.