The tiny woman with big ideas about female sport in Ireland 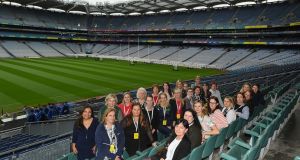 Gabriela Müller Mendoza is a tiny woman who delivers big. The petite Mexican exuded huge energy and presence when encouraging women to take up more leadership roles in sport at a recent Olympic Council of Ireland (OCI) workshop in Croke Park.

So gigantic actually that you had to do a quick double-take to check just how high her heels were when she mentioned that she was less than five foot tall.

This optical illusion was not accidental. One of Müller’s insights was that powerful people deliberately take up more space and time than the rest of us.

Power, she demonstrated – through a series of exercises and role play and plenty of disarming Latina warmth and humour – has nothing to do with stature or gender.

Empowering yourself is about improving your communication, valuing your knowledge and skills, and not being too modest to be ambitious or too naive not to strategise.

Being asked to develop your “executive presence”, “identify your management style” and explain your “negotiation strategies with stakeholders” is the sort of corporate-speak that makes some people run for the hills, especially in sport, where so many prefer to do and not talk.

She persuasively argued that these are imperative if you want to lead, especially for women who are in the minority at executive levels of business and sport.

Isn’t it striking, she noted, that even in female-targeted businesses like fashion, beauty and food, the industry leaders are still almost always men?

“What got you here is not going to get you there,” she said, urging those present to expand their ambition and metaphorically start “playing the tramlines because we [women] play too short, too safe, too small.”

It’s nearly a year since then junior minister for sport Patrick O’Donoghue threatened to introduce gender quotas to get more women involved at the decision-making end of Irish sport.

This newspaper produced statistics to show that in 20 government-sponsored sports organisations, only two boards (camogie and Special Olympics) had 50 per cent female membership or more.

Paralympics and Swim Ireland (at 40 per cent each) were next best, but 11 sports had less than 20 per cent women on their boards and three had none at all.

The storm soon fizzled out, and the equality debate has now moved elsewhere.

OCI president Sarah Keane, like Easkey Britton, believes women in sport can’t let it and must empower themselves; that when it comes to increasing female numbers as decision-makers (coaches, managers or executive members) they’ve got to step forward and be more brave and proactive.

The OCI availed of an International Olympic Committee (IOC) Solidarity grant to bring Müller to Dublin to speak to a group of 30 women across a range of Olympic sports.

Müller believes that sport, like education, is “one of the major accelerators of change from the grass-root level up”.

She was 24 when she left Mexico City for a career in Telecoms and IT that brought her around the globe. She eventually settled in Switzerland, and, 15 years ago, switched careers to become an executive coach, promoting leadership, communication and diversity in industry and sport.

Switzerland is home to the HQs of many of the world’s largest organisations so, with her personal passion for football and tennis, it is no accident that she has collaborated with Fifa and the IOC.

“My company has been working with the IOC for 11 years launching programmes like this to empower women to step forward, raise their hand, say ‘I can!’ and ‘I will!’ It has actually had a ripple effect. We’re moving forward,” she said.

“Worldwide we know that there are less than 20 per cent of women in parliaments and it oscillates between 10 to 23 per cent in sports bodies.

“The Olympic Agenda 2020 [of 50 per cent male/female participation] is quite ambitious. I’m working towards that same vision, empowering women to at least 30 per cent leadership positions by then.

“Research shows that if an organisation doesn’t reach 30 per cent for any minority – gender, age, race, educational background – then a relevant change doesn’t happen. What we have seen is that if you don’t reach 30 per cent, eventually it goes back to 20 and then to 10 per cent and sometimes even lower.”

Tokyo 2020 will have the largest percentage (48.8) of female athletes at an Olympics, and the IOC is heavily committed to more diversity at boardroom level.

Müller believes both genders should fight for equality, and cites Spain’s Marisol Casado, president of the International Triathlon Union, as a particularly influential sports leader.

Her own workshop in Dublin not only gave some Irish women some useful personal and management skills but a shared identity and support system.

Many left vowing, at the very least, to stay in touch and mind their language after she persistently corrected them for using reductive words like “sorry” and “just”.

Saying “sorry” may be a gender-neutral cultural affliction in Ireland, but international studies show that women in the work place say “sorry” as much as three times more than men.

Müller said her visit will have been a success if “these women have gotten to the next level or two in their organisations within three to five years”.

“I’d like to walk one day into an international federation at the highest level in the world and meet someone who’ll say ‘Ola Gabriela! Remember we met in Dublin in 2017?’ and see that they are running the show at the top!”

A tiny, powerful woman threw down a big challenge to some Celtic “chicas”.

It’s now over to them to make themselves bigger, and spread that word if more women are to become leaders in Irish sport.