Simona Halep’s withdrawal another bodyblow to women’s US Open 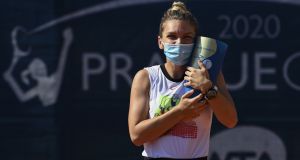 Simona Halep celebrates with the trophy after winning the Prague Open. “I always said I would put my health at the heart of my decision and I therefore prefer to stay and train in Europe.” Photograph: Martin Sidorjak/Getty Images

When Simona Halep confirmed on Monday she was joining five other top-10 US Open refuseniks, all of them from outside the United States, the tournament organisers could do no more than sigh, reshuffle the women’s draw yet again and hope this was the end of it.

It probably is, given most of the serious contenders have arrived in New York to play in the rescheduled Cincinnati Open, the on-site warm-up event that starts on Thursday. However, in the unlikely event Serena Williams, Naomi Osaka or Coco Gauff were to pull out, the US Open would be in serious personality deficit.

They are the big names left in the women’s draw of a tournament whose nervous organisers – naturally concerned about taking a $120m hit through potential lost global television revenue – agonised before deciding to go ahead without fans in the cavernous stadiums of the Billie Jean King Center.

The attention was always going to be on Williams, who needs one more title to equal Margaret Court’s record of 24 majors, but who last won there in 2014 and turns 39 next month. The uncertainty around her grew in Lexington, Kentucky, last week when Shelby Rogers won 1-6, 6-4, 7-6 (5) in the semi-finals of the inaugural Top Seed Open to become the first player outside the top 100 to beat her in the past eight years.

The scale of the damage in Queens, meanwhile, is already significant. With two weeks to go before what is bound to be a strange opening day, they have already lost the defending champion, Bianca Andreescu, and the world No 1, Ashleigh Barty, along with Elina Svitolina, Kiki Bertens, Belinda Bencic and now Halep, as well as a slew of lesser players.

Halep, a semi-finalist five years ago, probably would have started favourite in a shredded field, as she is in excellent form. Yet she pulled out just 24 hours after beating the third seed Elise Mertens, 6-2, 7-5, in convincing style to win the Prague Open. The Russian Irina Khromacheva replaces her.

Halep revealed before Sunday’s final she has trained only on clay during the sport’s five-month shutdown and will now continue her preparations for the Rome and French Opens next month.

It never looked likely she would risk a trip to New York, given her concerns about the continued and random spread of Covid-19 across the United States and it seems she was unconvinced that even the rigid safety precautions the United States Tennis Association have insisted on would be sufficient.

“After weighing up all the factors involved and with the exceptional circumstances in which we are living, I have decided that I will not travel to New York to play the US Open,” Halep said on Twitter.

“I always said I would put my health at the heart of my decision and I therefore prefer to stay and train in Europe. I know the USTA and the WTA have worked tirelessly to put on a safe event and I wish everyone there a successful tournament.”

On the men’s side, Kei Nishikori, a US Open finalist six years ago, withdrew on Sunday from the Cincinnati Open after testing positive for coronavirus and is almost certain to rule himself out of the grand slam. – Guardian

Here is your handy guide to sport on television this week 17:01
Sam Bennett on top again as he takes Paris-Nice first stage 16:55
Fulham consign Liverpool to sixth-straight defeat at Anfield 16:25
Relegation looms for West Brom after Newcastle stalemate 14:14
Rangers crowned Scottish champions as Celtic slip up 13:59