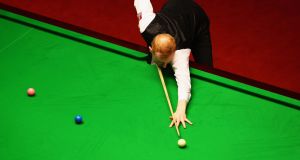 Anthony McGill of Scotland in action during the World Snooker Championship.

Ronnie O’Sullivan moved into a 5-3 lead over Mark Selby in their World Championship semi-final after an evening session marred by a series of costly kicks.

Bad cue-ball contacts - which are being blamed on the increased humidity at the Crucible this year due to the tournament being re-scheduled for the summer, blighted both players in the third frame.

And O’Sullivan was seen to discuss the issue with referee Paul Collier before the fourth frame, when he proceeded to fire a break of 85.

A change of balls at the interval reduced the bad contacts but the errors continued as Selby missed a simple green to give O’Sullivan the chance to go 4-1 in front. But Selby bounced back to win the sixth frame after bravely taking on and potting a red to the middle which O’Sullivan had previously refused.

O’Sullivan fired a break of 58 to go 5-2 ahead but Selby clawed his way back from a 51-point deficit in the final frame of the evening to end the session 5-3 behind.

Five years after shedding his losing mentality, meanwhile, Anthony McGill moved closer to a first World Championship final by opening up a 6-2 lead over eighth seed Kyren Wilson at the Crucible.

Wilson was almost unrecognisable from the player who polished off defending champion Judd Trump on Tuesday as a series of missed pots and safety errors gifted qualifier McGill the chance to continue his dream run in the tournament.

The 29-year-old McGill made his Crucible debut in 2015 when, despite beating Stephen Maguire and Mark Selby in his first two matches, he admitted heading into his last-eight clash with Shaun Murphy in the certain knowledge was going to lose.

McGill said: “I remember going into the match against Shaun and I didn’t think I could beat him.

“After the match I realised that I could have won and it was a silly way to think, and I put it right the following year when I drew Shaun in the first round and beat him. I realised I shouldn’t go into a match thinking I can’t win.”

After an epic first-round triumph over 13th seed Jack Lisowski and subsequent successes against Jamie Clarke and Kurt Maflin, McGill now stands a strong chance of joining Stephen Hendry, John Higgins and Graeme Dott as the only Scottish finalists in the Crucible era.

Wilson started the semi-final a heavy favourite after his stunning performance against Trump, but he was slow to get out of the blocks and McGill instantly seized advantage with breaks of 83 and 78 respectively.

Even when Wilson got his chance he all too frequently missed simple pots or ran out of position, a mistake on the green in the third frame abruptly ending a break of 55 and allowing McGill to step in and extend his lead.

Wilson belatedly got a frame on the board and although McGill took the next two to lead 5-1, a simple missed blue in the seventh proved the difference between the Scot going further ahead and Wilson coolly clearing the colours to reduce his arrears to 5-2.

However, any hope of it being a turning point for Wilson were dashed as the nerveless McGill polished off a highly satisfactory session from his perspective with a break of 92, securing his advantage ahead of their resumption on Thursday morning.