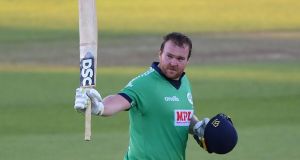 Ireland’s Paul Stirling reacts to reaching his century during the third One Day International cricket match against England at the Ageas Bowl in Southampton. Photograph: Mike Hewitt/AFP via Getty Images

When Paul Stirling woke up from the morning after the night before, it felt pretty good. As well it might, having crashed 142 of the best to knock off the world champions the evening before, the first time Ireland have beaten England in England.

When it was over, they walked across the field at the Ageas Bowl for one final stay in the hotel they had been restricted to for over three weeks. Beers were downed, songs were sung – the highlight when Peter Chase belted out his rendition of The Rattlin’ Bog. The seamer didn’t play in the series but that didn’t matter – this was a triumph of the entire squad who quarantined and trained and eventually saluted in the final one-day international from the second last ball.

“We are delighted,” Stirling told The Irish Times as Andy Balbirnie’s boys boarded their flight home. “It freed us up chasing 330. There is only one way you can play in that situation, not to be reckless but to have a positive attitude. We learned from the first couple of games and that freed up our batters to play their natural, aggressive way.”

What makes Stirling’s match-winning contribution all the more remarkable is the fact that he very nearly had to make his international retirement before this summer. This was a consequence of perhaps the biggest growing pain Ireland have experienced since becoming a full member of the International Cricket Council in 2017: their players are no longer eligible to turn out in county cricket as locals. It put the 29-year-old, who enjoyed a career at Middlesex stretching back to 2010, into a particularly tough spot. Club or country?

“It was definitely a tricky decision to make,” he says. “In the end, I went with my heart over my head. I could either stay in England and play in front of the crowds there or else come back and continue playing for Ireland. That was a really tough call but one that you have just got to make the most of.” In recognition of Stirling’s loyalty to the cause, he was appointed Balbirnie’s vice-captain when William Porterfield handed the armband over late last year.

Wins like Tuesday reinforce what a good call it was for Stirling to stick with Ireland but there is a natural restlessness about making sure that this is the time the team in transition take the next big leap.

“We need to keep improving and make sure this isn’t just a one-off,” he says. “There are some really promising signs in the last week even in the games we got beaten in we were taking middle-over wickets, which is the hardest thing to do in one-day cricket, and getting runs down the order as well – the two things we’ve not been as good at in the past.”

Despite the landmark moments Irish cricket has enjoyed in recent summers – not least their first three Tests, which included bowling England out for 85 at Lord’s last summer – they have been working against a structural disadvantage since the 2015 World Cup.

It was from then that the ICC board made the shameful decision to reduce the marquee tournament from 14 to 10 teams, essentially elbowing the Irish out of the way in the process. However, due to the initiation of the World Cup Super League, in which this was the first series, Balbirnie’s team will now play seven other three-match ODI series over the next two years. This will include taking on big dogs New Zealand, South Africa, the West Indies and Sri Lanka.

It will be no easy task to finish in the top seven of that 13-team affair (to earn automatic qualification for the 2023 World Cup), but it will give Ireland consistent exposure to stronger outfits home and away. If looking at the example of women’s cricket, where a similar competition was initiated in 2014, it has done wonders for bridging the gap between the best and the rest. It will also assist administrators in turning a buck.

“It is pretty special,” Stirling says of banking their first points in this new competition against the 2019 World Cup winners. “Putting context into every ODI we play meant it was still such an important game even though the series was lost. We have come a long way in the last 10 years and the fixtures are getting tougher. Now we tend to be playing against the best teams consistently so that’s been a real challenge and hopefully we can keep improving.”

As for when they play England again, that’s less clear. When Kevin O’Brien hit the winning runs, comparisons came flooding in from when the Scottish football side of 1967 knocked off Bobby Moore’s team the year after they won the World Cup, in turn playfully identifying themselves as the new world champions.

Balbirnie’s team, of course, aren’t that. However, there are worse ideas than encouraging England to play an annual tournament that involves Ireland and the other European nations around the top-flight: Scotland and the Netherlands. As Stirling and Balbirnie showed the world on Tuesday, there is something to be said for Irish cricket continuing to dream big.