Experienced Dublin visitors got a shock on a trip off Baltimore, Co Cork 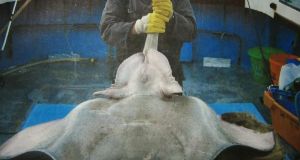 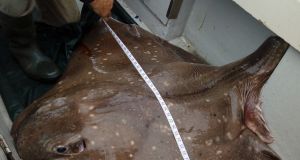 A common skate with its nose and tail cut off.

A recent deep-sea boat fishing trip in Co Cork turned into a shocking experience for a group of experienced Dublin sea anglers.

On Tuesday, July 14th, the group set out from Baltimore, Co Cork with charter skipper Nick Dent for a pleasant day’s fishing aboard his charter vessel Rooster.

Anchored some distance off shore, they encountered a good selection of fish including bull huss, smooth hounds, conger and their prize catch of a huge common skate. All of which were safely returned to the water.

However, to the shock of all present, when the big skate was brought aboard by its captor, Joe Connell, it became apparent that its tail and nose had been hacked off. This massive animal, with a wingspan of 160cm (63in) and estimated weight of 160lb, was mutilated beyond belief.

“I would say it required a machete or sabre saw to cut off the tail and nose. In all my years sea fishing, I have never seen anything like this,” Ray Bannerman, said.

The matter has been reported to the relevant authorities, according to Bannerman.

Fisheries officers observed two individuals retrieving and servicing a net and placing it in a vehicle. Officers carried out a search and seized a net 68 metres long which contained mullet and flounder, and the men were apprehended.

Brian Beckett, Director of Eastern River Basin District at IFI, said: “Illegal nets are very damaging to vulnerable estuary fish stocks including salmon, seatrout, bass and mullet along the east coast. This conviction highlights the persistent issue of illegal net fishing which is a serious environmental crime and will not be tolerated.”

Members of the public can report instances of illegal fishing, water pollution and invasive species by calling IFI confidential hotline on 1890 34 74 24 or 1890 FISH 24.

Connolly’s crew enjoy Lough Sheelin
On Lough Sheelin, although reports over the past while have been disappointing particularly during daytime hours, it is only a matter of time before the lake returns from the mayfly bonanza and perch fry period to its normal capabilities of quality fishing.

Certainly, for Dublin angler, Ray Connolly, his brother Donal and two friends it was a week to remember. Fishing in two boats in close proximity to each other, they caught five good trout and had numerous ‘snatches’, during one evening session.

To cap a great week, on another evening Ray went a step further with a trout of approx. 4lb (see above).

“I had no joy with a Peter Ross or Sedge, so I switched to dapping and got him on a cricket. It’s my best fish so far this year,” he said.