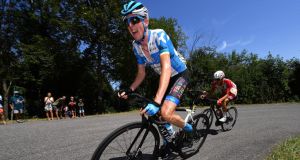 Daniel Martin of Ireland and Team Israel Start-Up Nation has broken a bone in his back. File photograph: Getty Images

Dan Martin is now facing a personal time trial to recover for the Tour de France later this month after withdrawing before Friday’s Stage 3 of the Criterium du Dauphiné with a fractured bone in his lower back.

The Irish rider crashed during the high-speed finish on the Col de la Porte, the final climb on Thursday’s Stage 2, and although Martin rode on to the finish, he was later diagnosed with a non-dislocated sacral fracture.

With the Tour starting in Nice in just over two weeks - on Saturday August 29th - the 33 year-old hasn’t much time to play with, but remains hopeful nonetheless. It was to be his first Tour start with his new team Israel Start-Up Nation, and he’d already spoken about his Stage winning ambitions.

Taking the advice of the Israel Start-Up Nation team doctor Ortwin Shafer, who advised him to head home in the hope of healing up in time for the Tour, Martin has now returned to his base in Andorra.

In a video message sent via Israel Start-Up Nation, he further explained the nature of his injury and his hopes for as swift recovery.

“I am really hopeful that I will be ready for the Tour de France,” he said. “It’s a shame as I felt I was in great shape but I’m a fast healer and I have reason to remain optimistic.”

Martin explained how the crash happened: “It was probably the best I’ve felt in racing since the lockdown but when you relax, those bad things happen. There was nothing I could do. I was preparing myself for the last climb, the last effort, but the guys crashed in front of me. One of the guys hit a sign that was in the road and I immediately knew I’d hurt myself,” he said.

“It’s one of the weirdest feelings, I don’t have a scratch on me really, but I landed full force on the bottom of my back. Unfortunately we have a small fracture down there in my sacrum. I rode to the finish and could pedal no problem but it was painful and I could tell something was not quite right, so we got it checked.”

After being diagnosed before the team dinner on the Thursday evening, he agreed to head home to Andorra on Friday rather than continue in pain and risk slowing the healing process.

“It’s better for me to go home and recover, there’s no reason to be here and not be 100 per cent fit. Hopefully it heals in time for the Tour. I need to do everything we can to rest up and be as fit as possible for the start of the Tour.”

In an interview with The Irish Times last month, he spoke about his renewed Tour ambitions with his new team: “We’re planning to approach the Tour slightly differently this year, just because of the way the season is set up. The plan is to step away from the general classification fight, and try for stage wins. That would be absolutely great for the team, and the fact the team are encouraging me to shoot for stages now, I’m looking forward to that approach.”

Martin came closest to the Tour podium in 2017, finishing sixth, riding the last few stages with a broken bone in his back. He also crashed out at the prologue of the 2014 Giro d’Italia, which started in Belfast, breaking his collarbone in the process.