View from Melbourne: Sporting fabric of the city suffering from second lockdown 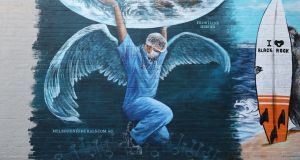 A mural to honour the medics currently helping to fight Covid-19 is seen in Melbourne, Australia. Photo: Robert Cianflone/Getty Images

Last Thursday was a bad day for Melbourne. It recorded its’ highest single-day increase in new Covid-19 cases since the start of the pandemic. A stage 4 lockdown was imposed, including a curfew. Those still deemed “essential” must apply for permits to travel to and from work.

The psychological and economic impact of the second wave of the virus seems deeper than the first.

In June, schools and businesses had re-opened. The optimism could be heard across Melbourne’s network of trams, coffee shops and sports fields. And then suddenly, we returned to – Australian abbreviation alert – “iso”.

To use a sporting analogy, a bit like the chasing pack in Serpentine’s victory in July’s Epsom Derby, the authorities in Melbourne underestimated the virus’s resilience and overestimated their capacity to catch it.

The most recent burst of pace from the virus will, sadly, burn off many businesses. Last week my employer, the University of Melbourne – the richest in the country – announced that it was seeking 450 job losses. My colleagues and I are now awaiting the virtual knock on the door – known as the zoom and doom call – to see who will be let go.

The specialised sports law programme I run will likely be mothballed. Those who normally attend the course – in-house lawyers and administrators at sports bodies – have indicated that discretionary spending on staff development is no more. The figures are stark. In March, the AFL, stood down 80 per cent of its staff. It was a similar situation at Cricket Australia, Rugby Australia and Rugby League (NRL). All three entities also replaced their CEOs.

For the various professional codes in Australia, the pandemic quickly revealed a key weakness – an over-reliance on TV money as a source of revenue. The AFL’s revenue in 2019 was about €500 million of which half was from broadcasting. This year, the AFL had to re-mortgage its prime asset – the Docklands stadium in Melbourne – in order to ride out the pandemic.

In 2019, executives in Australian sports flew to the US and flirted with social media and streaming platforms as potential broadcasting partners. In 2020 the same executives, if they remained in post, were desperately re-negotiating scaled-down TV deals with existing partners, who, by way of force majeure and other contractual clauses, were threatening to walk away from the sport.

Keeping the show on the road during the pandemic has also been vital so that Australian sports can continue to benefit from what is now their second biggest item of revenue – gambling. The way sports wagering is organised in Australia is that as the controlling body of a sport, a governing body is entitled to a share of betting revenue on that sport.

And Australians like to bet. In fact, per capita Australians top the global charts for biggest yearly gambling losses. In April, consumer spending on online gambling in Australia increased by over 65 per cent. As sports returned from their initial Covid-related hiatus in May, punters turned from online casinos and gaming to wagering on sport. Last month, the parent company of Ladbrokes announced that its Australian arm had grown by 76 per cent during a financial quarter. At one point in 2020 Australia accounted for half of that bookies’ global sports wagering revenue.

The pandemic has also had an influence on the primary source of expenditure in Australian sport – player wages. In all the major Australian sports, player wages have been cut – in soccer the governing body asked for an 80 per cent reduction – and the terms of existing collective bargaining agreements (CBAs) between player unions and leagues renegotiated.

It is likely – and this may be something the GAA considers in negotiations with the GPA – that future CBAs will be premised on a revenue-share and not a fixed-sum model. Basically, the former means that in the good times the players are guaranteed more but in the bad times proportionately less.

A third impact of the pandemic has been to put into question the sincerity of Australian sports’ commitment to women’s sport. For example, in contrast to the extraordinary logistics that have gone into keeping the men’s competition alive, the women’s AFL competition was simply abandoned in early 2020, despite being at its final stages.

While the last major sporting event to be held in Melbourne was the record 86,000 attendance at the T20 World Cup women’s cricket final in March, since then less than one per cent of content on leading Australian sports TV channels has been devoted to women’s sport.

There is also a worrying trend in female participation at the grassroots.

Before the coronavirus, about half of all females in their teens taking part in sport dropped out by the age of 15. A survey in July showed that more than a quarter of Australian teen girls are at risk of not returning to play team sport. Ninety per cent of those surveyed revealed that they had replaced sport with “screen time” and two thirds are spending more time on social media.

The teachers often open the day with a chat, which is basically an excuse to talk about sport, usually footy

Finally, sport is part of Melbourne’s identity. Half of the teams in the AFL are Melbourne-based. For the first time since the 1850s, none are playing at home and all are scattered in various hubs across Australia.

The 100,000 capacity MCG is empty and may even be on AFL Grand Final Day – a public holiday. The Melbourne Cup in November – another public holiday – may have to be run in front of empty stands.

In cricket the Boxing Day Test may have to be moved to Adelaide. That’s like holding the Munster Hurling Final in Clones. Just because it has to be done, still doesn’t make it right.

The Irish community in Melbourne has not escaped the adverse impact of the pandemic. The domestic GAA season has been abandoned. Many on temporary visas had to scramble and pay dearly for flights home. Permanent residents have to apply for permission to visit home and yet compared to Australians, who haven’t had a recession in 30 years, we are probably, in our own quiet way, more resilient than most.

And we still have sport from here and home.

In the past few weeks working has meant sharing desktops with the kids. The teachers often open the day with a chat, which is basically an excuse to talk about sport, usually footy.

Ours normally say little but last week I heard my son remind the class how Ireland had beaten England at cricket and, thanks to Conor McKenna’s latest exhibition for Essendon, how doing a solo is no big deal in the superior sport of Gaelic football.

And later this month, I will, like many others in Oz, clamber down the stairs at some ungodly hour and login to see my home club play championship.

Gloomy emails and zoom can wait; there’s proper footy and hurling to watch.