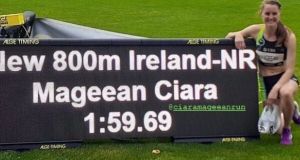 Ciara Mageean became the first Irish woman in history to break the two-minute barrier for the 800m with her victorious run in Bern, Switzerland.

With the sporting world all but grinding to a halt in mid March we used our April, May and June awards to salute three sportswomen, Kellie Harrington, Orlagh Farmer and Gina Akpe-Moses, who made an impact, in a variety of ways, outside their more familiar fields.

Gradually, though, sport is returning, Ciara Mageean among those who was back in competitive action in June when she ran at a meet in Switzerland.

A “rust buster” was how she previewed her first race of the post-lockdown athletics season when she spoke to RTÉ ahead of her trip to Bern, so it might have been reasonable to assume that she’d just be easing herself back in to action, that there’d be no fireworks.

And then she became the first Irish woman to break the two minute barrier in the 800 metres.

As rust-busting goes, that was the mother of all efforts.

Rose-Anne Galligan had held the Irish 800m record, running 2:00.58 in London seven years ago, Mageean’s personal best over the distance a fraction behind at 2.00.79. But the Co Down woman produced an exceptional run to clock 1:59.69 to put herself, not for the first time, in the Irish athletics’ history books. She was already the holder of the indoor mile and 1500m records, setting both marks last year.

“I am absolutely delighted,” she tweeted after the race. “With the disappointment of everything this year, Olympics postponed and lockdown for months, my coach, my team mates and I put our heads down and worked hard.”

“Devastated I won’t run for Ireland this year but I’ll continue to work and build on this for 2021 and beyond. Only the beginning of the few races I’ll run this season but I’m so grateful for the support of my coach, team mates and everyone back home.”

At that stage, the 28-year-old should, of course, have been fine-tuning her preparations for the Tokyo Olympics, hence her presence in Switzerland where she had been in an altitude training camp. Her focus, then, has had to shift to July of next year when, hopefully, the Olympics will take place.

While the postponement of the Games might have left her deflated, not least because, as she said herself, she’s in her prime, and robbed her of motivation to work hard, instead Mageean has been using this strange period to make herself an even better athlete.

“I’ve tried to look on the Olympics being cancelled in a positive light,” she told RTé, “that it gives me an extra year to focus on strengthening my weaknesses, closing the gap on the girls that were ahead of me at the World Champs last year.”

Her run in Bern, at a distance that isn’t even her strongest, suggests she put her lockdown to mighty fine rust-busting use.