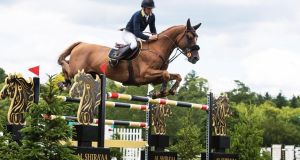 Ireland’s Shane Breen won the feature class at Hickstead on Friday, the Bunn Leisure Derby Trial, for the second year in succession but this time on the 14-year-old chestnut stallion Golden Hawk.

Only two riders, from a line-up of 43, went clear in the first round over Kelvin Bywater’s 1.60m track and, when Britain’s Graham Gillespie decided not to contest the jump-off with Andretti, Breen only had to complete to win. The Tipperary native claimed this class last year on Can Ya Maken which, fifth on Friday, will also compete in Sunday’s famous Hickstead Derby.

“I think I have two great chances in Can Ya Makan and Golden Hawk, and I’m looking forward to it,” commented Breen. “Golden Hawk has never done a Derby, but he has all the ability. I think if I get it right, both could have a clear round. Of all the years I’ve done this class, this is definitely the biggest chance I’ve ever had, with these two horses. If I don’t win it this year or next year, I might have to give them to my brother,” Shane said referring to his younger sibling Trevor, who won the Hickstead Derby in 2014 and 2015.

Having recorded two wins on the first day of the Longines Global Champions Tour of Cascais in Estoril, Portugal, the best result for Irish riders on Friday was a sixth-place finish for Denis Lynch.

Riding Iron Horse Farm’s Gc Chopin’s Bush in the night’s 1.50m jump-off class, the Tipperary native was one of six riders who progressed to the timed round but with eight faults in 41.05 seconds, he had to settle for sixth behind Frenchman Olivier Robert who recorded a double clear in 36.69 on Vangog du Mas Garnier.