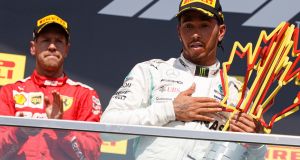 Formula One drivers Lewis Hamilton of Mercedes AMG GP and Sebastian Vettel of Scuderia Ferrari react on the podium after the 2019 Canada Formula One Grand Prix in Montreal, Canada. Photograph: Valdrin Xhemaj/EPA

Ferrari’s request to review Sebastian Vettel’s penalty at the Canadian Grand Prix has been rejected by the stewards, a decision that confirms Lewis Hamilton’s victory at Circuit Gilles Villeneuve.

Ferrari presented what they described as “overwhelming” evidence in Vettel’s favour at the French Grand Prix on Friday. However the four stewards who had made their decision in Montreal and reconvened at Paul Ricard rejected it, adjudging that the presentation did not include significant or relevant new elements. They were scathing in dismissing the only original element, video footage of Sky Sport’s presenter Karun Chandhok, as “personal opinion”.

The five-second penalty Vettel received in Canada cost him a likely win and meant Hamilton, who finished second, took the victory. Vettel had been furious and insisted he had not been in control of his car when he went off and rejoined at the first chicane. But the German was judged to have rejoined in an unsafe fashion and to have forced Hamilton off the track.

The Ferrari sporting director, Laurent Mekies, was bullish before the stewards met. “In the aftermath of the grand prix, we have access to a number of new evidence,” he said. “We believe this evidence is quite overwhelming when it comes to establishing that Sebastian did not breach any regulation.”

Mekies presented Ferrari’s case to the stewards but in a season when the Scuderia have performed well below their best, they were found wanting once again. The stewards’ straightforward conclusion, which was released after two hours of deliberation, implied Ferrari’s petition had brought no information that was valid to the case and summarily dismissed it.

Part of their statement read: “Having examined the evidence presented by the team, the stewards determine the following: There are no significant and relevant new elements which were unavailable to the parties at the time of the competition concerned.”

Key to the decision was that evidence considered as “new” was only that which was not available to Ferrari by the end of scrutineering after the race. Ferrari submitted seven items to the stewards: telemetry data, video analysis of camera views, a video analysis performed by Chandhok for Sky Sports, a video of Vettel’s face camera, post-race and video images, analysis of GPS data and a witness statement from Vettel. The stewards noted only two elements were “new”: Chandok’s analysis and the face camera footage.

The former was dismissed by the stewards as “not significant and relevant as this is a personal opinion by a third party”. The latter was similarly rejected as the footage was already available in other videos.

Chandhok competed in 11 F1 grands prix between 2010 and 2011 and it is difficult to square his post-race opinions with the “overwhelming” evidence Ferrari claim to have complied, and their two-week long pursuit of overturning Vettel’s penalty has been left looking futile and somewhat absurd.

The stewards were kept busy further considering the finer details of rejoining the track safely in the second practice session at Paul Ricard. Hamilton went off through turns three and four and, having got the car under control, came back in front of Max Verstappen’s Red Bull. The Dutchman subsequently was unable to take the correct line through turn four and went wide. Both drivers were summoned to the stewards but no further action was taken. They noted that Hamilton’s visibility had been limited, that he had checked his mirrors before returning to the circuit, that the incident had not been dangerous and not caused Verstappen any lasting disadvantage.

Hamilton’s difficulties were uncharacteristic on a day when Mercedes had once again been in control during the first two sessions. He was quickest in the morning leading a one-two with his team-mate, Valtteri Bottas, only six-hundredths back, while Charles Leclerc was just under four-tenths back in third. Bottas led FP2 in front of Hamilton with Leclerc and Vettel in third and fourth, over six-tenths in arrears. Every sign indicates Mercedes are in position to extend the run that has seen them win all seven races this season and given Hamilton a 29-point lead in the world championship.

“Everybody is to blame,” he said. “The problem is we are hurt with these things. I think they started a long time ago, did he cross the white line, or use too much kerb? Let us do what we want. If you are unhappy with how we race and how we drive then build different tracks – it’s as easy as that. We have so many pages in our regulations, if you want you find the paragraph that suits. How can you change it? Just burn the papers.”

“Without commenting much on the decision, I think that no doubt that as Ferrari we are all very unhappy and disappointed,” he said.

“We are disappointed certainly for Ferrari, but we are also disappointed for our fans and for our sport. We do not intend to comment any further.”