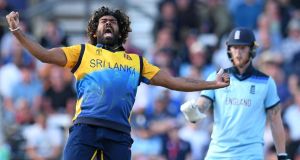 Against all the odds Sri Lanka produced the result of the tournament with a stunning 20-run victory over England. Dimuth Karunaratne’s side, pursued by the rain for most of their stay here, had been grumpily unimpressive until now with a solitary victory over Afghanistan.

But here in the Headingley sunshine they humiliated England, for whom only Ben Stokes, stranded at the crease at the end on 82, could be content with his display with the bat. Not that he will be smiling much after England had lost a match which they appeared to be controlling at the halfway stage with Sri Lanka restricted to 232 for nine.

The architects of Sri Lanka’s win were the old soldiers on the brink of being discarded. Angelo Mathews hit a craggy unbeaten 85 – a gnarled old pro’s innings by his standards which looked insufficient to keep his side in the game. Then Lasith Malinga, the old white-ball trouper, conjured four vital wickets from nowhere, all of them top-order batsmen.

Here was a fine example of the difference between a World Cup match and one that is part of a bilateral series. A target of 233 for a side that loves chasing? A mere bagatelle. Not with the additional tension of a tournament that matters, not against a Sri Lankan side that has been universally derided, but which, unlike the bookies, refused to accept that defeat was inevitable.

The tension in the England dressing room was triggered by the early dismissal of both openers, a rare event in this tournament, especially among those near the top of the table. For the second time in the competition Jonny Bairstow was out first ball, lbw to Malinga. James Vince unveiled the statutory brace of breathtaking strokes before departing caught at slip.

Now it was 26 for two and no time for frippery. England had budgeted for two more points here and this could no longer be taken for granted. But Joe Root was still there. The best teams have an ordinary Joe, a batsman prepared to be self-effacing, who does not need to have the crowd gasping at the audacity of his strokeplay, who measures risk and reward adroitly.

However, on this occasion Root could not guide his team home despite posting his fifth half-century of the tournament. After Eoin Morgan had succumbed to an excellent return catch by Isuru Udana, Root flicked down the leg side and the review proved positive – for Sri Lanka

Stokes remained resolute, a pragmatist among wayward cavaliers. Now his partners kept disappearing with wanton regularity. Moeen Ali clubbed the off-spinner Dhananjaya de Silva to square leg for six and then, to the exasperation of all non-Sri Lankans in the Leeds crowd – sought another six over Udana at long-off. Instead he found the hands of Udana.

Chris Woakes and Adil Rashid both opted to cut De Silva’s off-spinners, something Tykes of old would never have tolerated – at least not before July. Both were caught behind by a jubilant Perera.

Now 55 were needed with just two wickets in hand, a stern first test for Jofra Archer, the international batsman. Stokes was stranded once more as Archer holed out to long on. Now Stokes cracked 25 runs off his own bat including two mighty sixes off Udana. But Mark Wood, defending the last ball of Nuwan Pradeep’s final over, edged to the keeper and the Sri Lanka celebrations could begin. They have moved into fifth place in the table. England are stuck in third.

The Sri Lankan innings was a throwback. 232 for nine was a commonplace total decades ago but a rarity now. Their openers, the only batsmen to show any form so far in the tournament, were dismissed inside three overs to contrasting outside edges, Karunaratne’s went to the keeper, Perera’s to third man.

Then Avishka Fernando produced the only modern contribution of the day. The 21-year-old gave us an enchanting cameo, which lasted 39 balls and delivered 49 runs. There were some glorious strokes especially against Archer, who conceded 14 runs in his third over.

Two sixes were flicked off his hip to square leg, elegant drives skimmed towards the boundary until he upper cut straight to third man. Fernando had scored 49 out of a total of 62 for three. He has yet to play a Test match. He surely will before long.

The recovery was gritty rather than graceful, which is unusual when Kusal Mendis and Mathews are together. They carefully compiled 71 together in 17 overs. It took Mathews, who had mustered nine runs in his previous three innings, 33 balls to reach double figures. This was a classic example of a very fine player out of form, doggedly hanging in there. Mendis was not much more fluent as they nibbled singles against England’s spinners. Rashid took two wickets in two balls, dispatching Mendis, Kusal and Jeevan.

The sole remaining obstacle for England was Mathews who eventually began to hit the odd ball with the middle of his bat. He finished with an unbeaten 85 from 115 balls, which owed everything to his vast experience and very little to the exquisite timing, usually such a shining feature of his play.

Only De Silva kept him company for long. But it was long enough. 232 may be scoffed at as a target in this era but the tenacity of the Sri Lankans coupled with a lemming like display by the lower order of England, who profess to like chasing so much, led to the most startling result so far. With England’s last three opponents Australia, New Zealand and India perhaps they cannot all go awol until the semi-finals after all. – Guardian