Ireland trials gets underway at the National Rowing Centre on Monday 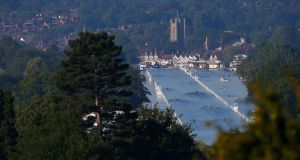 Women’s crews take pride of place this weekend. Ireland’s all-female team have it all to do at the World Cup Regatta in Poznan, Poland, while Henley Women’s Regatta puts strong competition in the way of crews as they prepare for next month’s Irish Championships.

The biggest home event of the year so far, Cork Regatta, was scheduled for this weekend but has been postponed. Cross headwinds are problematic at the National Rowing Centre and the organisers opted to push the two-day event to next weekend.

The youth of the Ireland crews in Poznan is remarkable. The pair of Claire Feerick and Eimear Lambe are just 20 and 21 respectively. The four have experience in Monika Dukarska (28) and Aileen Crowley (25), but the crew is completed by Tara Hanlon (21) and strokewoman Emily Hegarty, who is 20.

Antonio Maurogiovanni, the Ireland high-performance director, emphasises that they are new “scratch” crews and says that he has put no expectation of them to hit any mark: the task is to see would they be “competitive enough for World Cup Three”.

The Ireland trials, which start at the the National Rowing Centre on Monday, have the same purpose for the senior competitors: to decide which crews go forward to the final World Cup in Rotterdam. The shoot-out for places in the men’s lightweight double could be fascinating: Gary O’Donovan and Fintan and Jake McCarthy will each hope to join Paul O’Donovan in the Ireland crew.

Shane O’Driscoll and Mark O’Donovan, the world champions in the lightweight pair in 2017, have trained hard to prove themselves worthy of places in a heavyweight pair or four.

The Skibbereen men have entered the Silver Goblets for open pairs at Henley Royal Regatta. The entry also features the Commercial men’s eight in the Thames Cup and UCD’s four in the Visitors. Enniskillen have entered both junior men’s and women’s quadruples.

UCD have a tilt at the Remenham Cup, the open event for women’s eights. Enniskillen’s junior eight are also part of the Irish entry.

The Craigavon Lakes Regatta on Saturday holds pride of place this weekend on home waters.

Meanwhile, a Leinster training centre for rowers looks set to be built. An Bórd Pleanála has cleared the way for the 12-bay boathouse and facilities at Burgage Moyle on Blessington Lakes.

In Poznan, Germany take on all comers in the men’s eight. New Zealand have two great oarsmen in their crew: Mahe Drysdale and Hamish Bond. This crew is coached by Tony O’Connor, an Ireland Olympian and world champion as an oarsman.