Executive director warns AIBA is nearing insolvency due to €15 debts 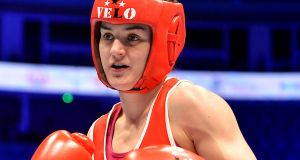 Kellie Harrington: preparing for this year’s World Championships, which are scheduled for Ulan Ude, Russia in Octoberthe. Photograph: Inpho

Irish lightweight world champion Kellie Harrington could be denied the chance to defend her world title later this year as the world governing body of boxing AIBA lurches into deeper crisis and close to collapse.

However, International Boxing Association (AIBA) executive director Tom Virgets has warned that the AIBA is nearing insolvency and has currently no way of paying its debts of €15 million. Its offices in Lausanne are reported working on a skeleton staff.

The International Olympic Committee (IOC) has stripped the governing body of any involvement in the organisation of the boxing tournament at the 2020 Olympic Games, meaning that it will not receive the €15.6 million revenue distributed to International Federations after Tokyo 2020.

Sources believe the situation is so bad that the World Championships are under threat.

According to a report in Insidethegames, a sports website, Virgets revealed AIBA had less than €357,000 in the bank and cannot afford to hold an extraordinary congress, called for by members of the executive committee.

“But you could get over the disappointment of the World Championships not happening. It would be much more disappointing if boxing was not at the Olympic Games.

“There is not a huge amount of communication coming out [from the AIBA],” added Carruth. “The situation with AIBA has been precarious for some time. No, we haven’t been advised that it [the World Championships] isn’t happening.”

On another front, the AIBA meltdown in the long term may be beneficial to the sport after confidence was so badly damaged in Rio 2016, when all of the 36 judges and referees were suspended. Ireland’s Michael Conlan became the face of protest after a highly controversial quarter-final decision awarded Russian Vladimir Nikitin the bout.

AIBA finances could be restored if an offer from Russian executive committee member Umar Kremlev to clear the debt is accepted. However the IOC remain queasy, their scepticism focussing on the lack of due diligence carried out on the proposal.

The IOC’s initial reason for suspending the embattled AIBA was because “its practices and activities continue to fall short of full conformity and compliance with the Olympic Charter and the IOC Code of Ethics”.

Lightweight Harrington is the only Irish boxer with a senior amateur world title.