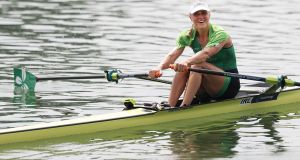 Sanita Puspure finished second with a time of 07:35.510, behind German’s Pia Greiten, who clocked an impressive 7:33.540. Photograph: Naomi Baker/Getty Images

Sanita Puspure safely negotiated her opening heat at the 2020 European Rowing Championships in Poznan, Poland, on Friday morning but will clearly face some serious challenge as she looks to defend her women’s single sculls title won in Lucerne last summer.

Rowing in the second of three heats, Puspure finished second with a time of 07:35.510, behind German’s Pia Greiten, who clocked an impressive 7:33.540. With the third heat won faster still by the Austrian Magdalena Lobnig, in 7:33.460, Puspure will be wary of Saturday’s A/B semi-finals, before thinking about defending her title in Sunday’s final.

Of the seven Irish crews competing on day one, four crews progressed to the A/B Semi-Final races on Saturday morning, the remaining three crews will race in the Repechage.

The women’s two crew of Tara Hanlon and Emily Hegarty kicked off the Irish team’s racing and finished third with a time of 07:16.590, and will next race in the Repechage.

The Women’s Four of Aifric Keogh, Eimear Lambe, Aileen Crowley and Fiona Murtagh came home just behind the Netherlands crew with a time of 06:26.990, and they will also race in the Repechage on Saturday morning. The Lightweight Women’s Double of Margaret Cremen and Aoife Casey finished fourth in their heat, moved into the Repechage later on Friday afternoon, and finished second with a time of 07:03.990. They will also compete in the A/B semi-final on Saturday.