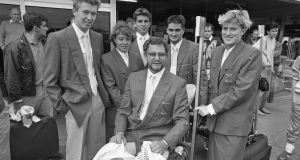 After 26 years the public interest in George Gibney has not subsided. That is nothing short of wondrous. It is as though Ireland’s former Olympic swimming coach has become the embodiment of a societal sin committed three decades before and never expunged. A violation that cannot go away.

It sits there. An irremovable stain. Pops up now and then, sometimes for an extended run, sometimes ephemerally before falling back into an extended hibernation, perhaps for years.

While Gibney never had to face being judged by his peers in a court of law, public sentiment has ensured that, although he hightailed it to the USA and the promise of a better life where no pesky questions about abusing young swimmers might arise, he has suffered.

His notoriety is widely known. That is a sufferance. That his crimes were committed around pool decks and in cars and in training camp hotels means the hurt always comes back to his sport of swimming. For the good people in it now with the modern, child-centred policies and the tighter governance put in place by Sarah Keane and her Swim Ireland team, that hurt is just something they have to own. It’s a cost of their past.

Director John Mullins rightly resigned from the Swim Ireland board last week, if only because he made a misplaced call in providing Gibney’s bail in Dún Laoghaire District Court in 1993 before siding with him and against the very children who were under his care.

He didn’t do anything illegal. He didn’t do anything wrong. But his judgement was questionable and history, told in his own words in the BBC Sounds and Second Captains ‘Where is George Gibney’ podcast, had him sympathising with a then alleged notorious paedophile and against a slew of children who were horribly victimised.

How the Leinster Branch, the most egregious offenders in Gibney’s chilling heyday, overlooked such a hot potato political issue and put his name forward for board membership last April is now for them to work out with the governing body. There is some patching up to do.

But this week was not just about Mullins. It was also about former Irish coach Peter Banks, an American Swim Coaches hall of famer in the USA. Banks did nothing wrong either except that he equivocated when he was asked a direct question. Banks was appointed as Swim Ireland High Performance Director in May 2009 having moved from Ireland, and from under the shadow of Gibney, to Florida in 1989 to further his career. He is one of the most experienced and well respected swimming coaches and leaders, not only in the United States but throughout the world.

To get a US visa, which Gibney did, he needed an American job offer. Banks was asked on the BBC podcast if he wrote the letter offering Gibney a job.

‘Do you think you could have?’ he was asked.

“He might have. Yeah of course, he could have.”

Like Mullins, Banks gave his time freely and without coercion. He was under no obligation to do the interview. But again, for Banks it was a car crash exchange.

And for another swimming coach the gift of Gibney has been to rise up from the past and insert himself back into their life, uncomfortably so.

That’s not a bad thing. Everyone is responsible for a legal system that allowed Gibney walk away from 27 counts of indecency and carnal knowledge of children. A legal system that also changed in time to jail child abuser Derry O’Rourke, Gibney’s appointed successor, who failed using the same defence.

Everyone should feel uncomfortable when his name comes up. The victims do. Their discomfort is felt each time that same power pose photograph of him at the side of a swimming pool with the glasses, the beard, the timing device wrapped like a doctor’s stethoscope around his neck, appears in the media.

Most acutely it is felt when an audio of his voice monstrously transports them back into his company on the pool deck.