Johnny Watterson: Sometimes it seems that the rules are just for suckers

What does playing within the spirit of the law really mean in professional sport? 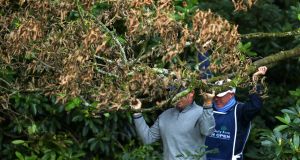 Pádraig Harrington and his caddie Ronan Flood move a tree branch out of the way to get to his ball at the 10th hole during the first round of the Dubai Duty Free Irish Open at Galgorm Castle. Photograph: Tommy Dickson/Inpho

You might have seen Pádraig Harrington and his caddie Ronan Flood apply Rule 15.1 of the Rules of Golf on the par-5 10th hole during his opening round at The Irish Open in Galgorm Castle in Ballymena.

The rule permits golfers to “remove a loose impediment without penalty anywhere on or off the course and may do so in any way”.

Harrington had overshot the green badly in his opening round with his ball ending up in thick brush under a standing tree.

Eagle eyed, he noticed that the offending piece of timber was detached. Through the prism of Rule 15.1 it had magically changed from a shagging piece of wood in the way of the swing plane into a loose impediment.

So in a family affair, the European Ryder Cup captain and his brother in law teamed up for a bit of landscaping, marching out through the undergrowth with the canopy segment aloft and unceremoniously dumping it out of harm’s way. Pretty satisfied he looked too.

It was reminiscent of Tiger Woods at the 1999 Phoenix Open when his drive on the par-5 13th veered left and ended up hitting a boulder, rebounding just far enough so that the boulder was directly in the line of his second shot.

Now this thing was a serious piece of geology. In lickityspit time a willing gallery rolled up their sleeves with between 15 and 20 able bodies grunting ‘one, two, three ughhh, one, two, three Ughhh’.

A small detail. Tiger was not one of them, preferring the role of pleased as punch overseer. But sure enough they heaved the boulder to one side, giving Woods a clear shot to the green, where he got home in two and made birdie.

The USGA maintained what Tiger and his team did was perfectly within the Rules of Golf, presumably because when removing a boulder you “may do so in any way”.

All around the world in professional golf tournaments you see golfers smashing their approach shots into the stands located at the side and back of greens. The stands are considered manmade structures. This might involve potentially missing the green by 100 yards with a player way out of position from a bad drive and having no hope of hitting the green a la Tiger in the Phoenix desert.

The player then gets “punished” with a free shot from a drop zone yards from the putting surface. How often has Sky’s shrewd on-course commentator, Wayne Riley, said: ‘I would say just smash it straight into the grandstand, take the drop and make par.’ It is called using the rules to your advantage.

On Wednesday Simona Halep beat Irina-Camelia Begu 6-3, 6-4 to advance to the next round of the French Open at Roland Garros. As a 17-year-old rising star, Halep felt that her chest was affecting her game, and opted to have her breasts reduced from a 34DD to a 34C.

“It’s the weight that troubles me,” said Halep at the time. “My ability to react quickly – my breasts make me uncomfortable when I play.” It worked. Since then the 29-year-old has won over two Grand Slams at Wimbledon and the French Open and over €30 million in prize money.

In basketball, the game’s most recognisable player LeBron James has made improvements to his eyes with surgery. In golf Tiger, Fred Funk, Zach Johnson, Bernhard Langer and Harrington have all done so too. British athlete Paula Radcliffe, the 2005 marathon world champion, used to sleep in a low oxygen tent, wear compression socks and a nasal strip because she believed it made her run faster. All perfectly legal.

But all of it raises questions. What is gaming the rules and what is breaking the rules? What does the spirit of the rule mean? Where does spirit fit in with the letter of the law? What is acceptable therapy and what is unacceptable enhancement?

At this year’s US PGA Rory McIlroy lost his ball in rough. An on-course reporter, in trying to locate the ball, stepped on it and made the lie worse. PGA Tour official Mark Dusbabek permitted McIlroy to retrieve his ball and place it. He did so but felt the lie was too good, explaining that his ball would have rested lower in the grass. Dusbabek would have allowed the higher placing but it was McIlroy who insisted the lie was too favourable.

Golfers like snooker players are taught to self govern. Stephen Hendry famously questioned a call and refused to take a free ball given to him when leading 16-15 in the 1994 World Championship final against Jimmy White. It could have cost him a lot more than a frame. But he ran out the 18-17 winner.

Honourable Harrington has lost count of the number of times he has called fouls on himself, when nobody else has seen an infringement. But the cartoon sized piece of wood removed by him and his caddie added a comedic value and perfectly highlighted the rule.