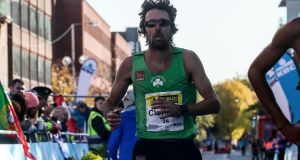 The flight from Dublin to London on Thursday morning is virtually empty. On arrival, Mick Clohisey is collected at Heathrow Airport and taken in a biosecure taxi to a biosecure hotel sitting somewhere on 40 acres of its own country grounds at an undisclosed location outside the city.

Along the way he’s politely told to keep even the general direction to himself. There is tight security at the hotel gates and again in the lobby, where after checking in Clohisey is immediately taken away to be tested for coronavirus. After that he’s told to keep to his own little training bubble until Sunday morning, which in his case means keeping to himself.

He spots Sonia O’Sullivan in the lobby along with Sinead Diver, which is nice, and he’ll later spot some other familiar faces, including Eliud Kipchoge and Kenenisa Bekele. Still everyone is more or less keeping to themselves, until start time on Sunday morning, when he’ll line up where the race normally finishes on the Mall next to Buckingham Palace, and in a field of just 40 elite men, run almost 20 laps of St James’s Park without a single spectator in sight and before an eight-hour live BBC audience of millions – and quite possibly be a part of marathon running history. (Look out for Mo Farah among the pacemakers.)

In or around the same time, there will be 45,000 other runners, from around 60 countries, who will have paid £20 for the right to run 26.2 miles somewhere far away in their own little bubble. It’s the London Marathon all right, just not as we know it, and Clohisey is perfectly justified in finding it a little strange.

“Definitely a strange atmosphere,” says the Raheny man, one of two Irish invites into that elite 40-man field, along with Stephen Scullion, both runners hoping the unique occasion may also help spring a personal best.

That’s because London is also being billed as the marathon showdown of the 21st century, which is probably a slight exaggeration but maybe not when the modern shoe technology is also considered. Kipchoge (35) and Bekele (38) are the only two men in history who have (officially) run the marathon in under two hours and two minutes, and Sunday also presents the chance for the first official sub-two – although the weather conditions may well inhibit that.

Despite their age, they’re also close to their prime – Kipchoge, from Kenya, running his world record of 2:01:39 in Berlin in 2018, before Bekele, from Ethiopia, went there last September and ran 2:01:41. Two weeks after that, Kipchoge went to the Nike promotion in Vienna also known as the Ineos sub-two, where running with a range of forbidden pace assistance he clocked an unofficial world best of 1:59:40.

Sunday’s 1.34-mile circuit around St James’s Park was the original site for that sub-two, before it was moved to the more weather-friendly Vienna, and both Kipchoge and Bekele, who will be wearing different models of the Nike Vaporfly, appear hungry to at least try for it.

The women’s race of 26 elites, which sets off three hours before the men at 7.15am, promises to be equally quick, Kenya’s Brigid Kosgei eying up her world record of 2:14:04 set in Chicago last October. For Diver, the 43 year-old born and raised in Belmullet and now representing Australia, there’s the 2:24:11 she ran when finishing seventh in London last year to aim for, that superb performance followed up by her 2:26:23 when finishing fifth best in New York.

Both Clohisey and Scullion, Irish marathon champions in 2018 and 2019 respectively, are in form to rewrite their bests: Clohisey’s 2:13:19 stems from Dublin two years ago, Scullion’s 2:11:52 run in Houston back in January, the Belfast runner last month improving his half marathon best to 61:12 in Larne.

“It will obviously be a different experience running the laps,” says Clohisey, “which I’ve been practising in the Phoenix Park on similar small laps to replicate the monotony. It’s also been a more compact build-up, as it was a late enough decision to run, as everything was so unpredictable this season. But training has been going very well and definitely excited for it.”

As well he might, the chance to race alongside Kipchoge and Bekele in the strangest of London Marathons, the 40th running of which won’t easily be forgotten.