Diego Schwartzman gets past Dominic Thiem after epic five-hour battle 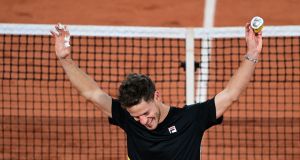 By the time Dominic Thiem and Diego Schwartzman had stopped hogging Court Philippe Chatrier, night had fallen on Paris yet two matches were still to be played. To the 750 fans present, it didn’t matter. They were proud witnesses to a five-hour psychodrama as Schwartzman eventually recovered to reach his first Grand Slam semi-final with a 7-6 (1), 5-7, 6-7 (6), 7-6 (5) win against the US Open champion Thiem at Roland Garros in a shade over five hours.

Schwartzman arrived on Chatrier all too aware of the opportunity at hand. While his momentum has been steadily building since he beat Rafael Nadal in Rome en route to his first Masters 1000 final, it has been clear for a while that the effort it took Thiem to win his first Grand Slam title last month would eventually catch up with him.

But even with his tank nearing empty, Thiem’s spirit was majestic. In a match filled with nerves and endless exchanges, so often Thiem looked dead on his feet before roaring back to life. Schwartzman led 5-4 and 15-30 on Thiem’s serve in the second set before one of the worst misses of his career, then he failed to convert 5-3 leads in the third and fourth sets. As he felt the chances slipping away, he raged to his team.

“In the second set and the third set I was out of my mind,” he said, laughing. “I don’t know what the people are thinking about me in that time but I was crazy, screaming, talking to my coach. My coach was saying: ‘Okay, play tennis, nothing else.’ I was so nervous because I saw the chance today and I didn’t take it in the second and in the third.”

Schwartzman did not take his chances, but what defines him is the nerve he had to constantly pursue another. Two points away from defeat at 5-5 in the fourth-set tie-break, Schwartzman cracked a forehand on to the baseline and delicately placed a drop-volley winner. He took the tie-break and eventually the match.

“We are friends,” said Schwartzman. “I have a lot of respect for him and that’s why this match is very, very important for me. Not just to play a good match, winning after five hours in Philippe Chatrier, first time. I’ve played few times five sets here and I never win. I think at the end, this night, I deserve to win. Come on.” – Guardian

1 Seán O’Brien: Anger over my parents’ break-up never left me
2 Ireland get the job done against Italy to keep alive Six Nations hopes
3 Ireland 50 Italy 17: Ireland player ratings
4 Hugo Keenan and Will Connors: The best of friends, the best of debuts
5 Liverpool come from behind to beat Sheffield United
Real news has value SUBSCRIBE