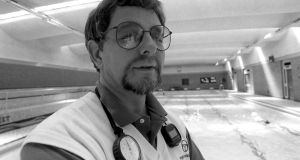 Swim Ireland (SI) have accepted the resignation of one of their 12 board members, John Mullins, following the airing of an episode of the BBC podcast “Where is George Gibney”. It is understood he offered his resignation last week.

Mullins stated in the BBC Sounds podcast that he provided Gibney’s bail set by Judge Hamill in Dún Laoghaire District Court in April 1993, when Gibney first appeared to face 27 counts of indecency and carnal knowledge of children levelled at him in 1993. At the time Mullins was one of two assistant coaches to Gibney at the Trojan Swimming club in Dublin.

“When I think about it, I stood his bail actually,” said Mullin in the third part of the series. “It was £1,000 at the time . . . I could hardly believe it because I never saw any sign of odd behaviour or child grooming or anything inappropriate at all. You know if we were in a car and passing a church, he’d bless himself. Not many people do that. It’s like he were a priest really. The idea he might molest children was the farthest thing from my mind.”

Gibney, who was 45-years-old at the time, evaded justice in Ireland and subsequently left the country for Scotland and the USA following a Supreme Court decision in 1994 that ordered he could not face trial. Time elapsed and specificity of the alleged offences were the primary reasons for Gibney’s release.

Mullins also stated that on a swimming training camp to the USA in the 1980s Gibney pre-arranged accommodation in a motel for him and a female swimmer from the Irish team.

“I found myself in an apartment in a motel,” he said. “This woman was in the bedroom and I slept in the lounge.”

When asked what age the swimmer was, he answered: “About 15.”

There is no suggestion that Mullins was involved in anything illegal. He agreed to take part in the podcast interview and all information was freely given.

Mullins believed Gibney’s claims of innocence over the male and female swimmers who brought the charges, one of them 10 years old when the abuse began.

He said in the interview that he thought Gibney was being prejudged and that Gibney, who he said was desperate, wanted him to believe that the charges levelled at him were malicious, adding that the Olympic coach was receiving help from “some religious order, some convent or other.”

He added: “I thought he was being falsely accused. I felt a bit sorry for him. He was extremely vulnerable when the noose was tightening.”

At the time siding with Gibney was not an unusual position to adopt as many officials in the then Irish Amateur Swimming Association, with some notable exceptions, also gave their backing to the celebrity coach.

Looking back Mullins added candidly: “I think I’d have done it again in the same circumstances.” When asked when he changed his mind from Gibney being innocent to being guilty he answered: “When he disappeared.”

It is understood that Mullins, who is a swimming coach, did not declare his connections with Gibney when he was elected as a director member of SI through the Leinster region last April.

The issue was first raised at a board meeting in August when Mullins declared that he had been interviewed for the podcast. But at the time he did not go into specific detail about the content or his past association with Gibney.

It is understood that when the podcast was aired on September 10th there was a general feeling of disquiet among SI members and in subsequent conversations Mullins was open and believed he took part in the interview for the right reasons. He was not asked to step down from his board position by SI. On reflection he decided to resign last week.

A statement issued by the governing body on Wednesday confirmed Mullins had resigned.

On the SI website the board position previously occupied by Mullins is now marked vacant.