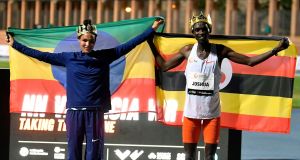 Two world records were smashed within an astonishing hour in Spain on Wednesday as Nike’s controversial track spikes again proved a gamechanger for athletics.

The meeting in Valencia had been billed as “World Record Day” by organisers and it quickly lived up to that as the 22-year-old Ethiopian Letesenbet Gidey obliterated the women’s 5,000m record held by Tirunesh Dibaba by more than four seconds in running 14min 6.62sec.

Shortly afterwards the 24-year-old Ugandan Joshua Cheptegei added the men’s 10,000m world record to his 5,000m one obtained earlier in the summer with an astonishing display of controlled running. His time of 26min 11sec beat the previous best, set in 2005 by Kenenisa Bekele, by a scarcely believable six seconds.

Both records will inspire controversy and awe given that Gidey and Cheptegui were wearing Nike ZoomX Dragonfly spikes, which contain a carbon plate and a unique foam, and have been billed as the “fastest shoes ever”.

While many in the sport are uncomfortable with the new range of spikes, which also includes the Air Zoom Victory containing a carbon plate – and especially the advantage they appear to give over rivals wearing other brands – they have been approved by World Athletics.

The athletes were also helped by Wavelight technology that uses flashing lights to show the pace needed to break records.

Cheptegei, who is scheduled to meet Farah at the Tokyo Olympic Games over 10,000m next summer, was asked if a second world record in two months meant he had achieved greatness. “I think this is just the foundation of what I want to achieve in years to come,” he replied.

Gidey, who ran the same time Emil Zatopek did when setting a men’s Olympic record at the 1952 Games, was equally effusive. “I dreamed of this record for six years, I want to thank Valencia for giving me this chance,” she said. “It’s very nice for Ethiopia. Before it was Tirunesh Dibaba and now it’s me.”

Nike athletes have also dominated marathon running since the company introduced the Vaporflys, which contain a special foam and a carbon plate, in 2016. The company’s new road shoe, the Alphafly, meanwhile, is said to improve running economy by an estimated 5-8 per cent. - Guardian