Sonia O’Sullivan: Running in a bubble may be the future for elite athletes 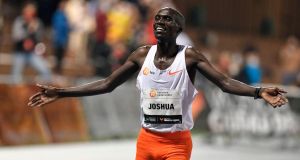 You’re standing in line thinking you’ve nothing to worry about, then, for a second, you suddenly wonder what happens if for some reason it does come back positive. And haven’t I been here before?

For now, it also seems to be the way forward, the only way that elite sport can be allowed to continue and keep some level of momentum going after the original calendar was ripped up earlier in the year.

There are many levels of sport too, but at the elite level it is as much about business as competing at the highest level; and just to stay in that business, as so many people have found out this year, you just have to find a way forward.

For the past week I have been living in that bubble; two bubbles, actually, that didn’t quite overlap, but maybe they did. In order to fly from Cork to London last Thursday and enter the London Marathon biosecure bubble, I had to first return a negative Covid-19 test; not quite the drug test that most athletes are well used to, but you do still get the thought in your head: “what if it comes back positive?” Immediately all plans would be thrown out the window.

There was a little more tension too when I heard an Ethiopian athlete was refused travel when their test came back positive.

It may be just one more thing for athletes to worry about, and yet this could be the new reality if the Olympics are to go ahead next year: the paperwork, the protocols – all extra things that athletes are getting used to this year that may just come in handy next year when it could all become part of the life of an elite athlete.

As an approved biosecure venue required by the UK Government to allow the event to go ahead, some of the usual comforts around the London Marathon were taken away; there were rigid time slots for eating, two different sittings, and no socialising or hanging around the hotel lobby.

The instructions on arrival at the lobby were pretty basic: do what you need to do in a short time then return to your room. The hotel grounds were the limits put on the athletes, the last few days of training done on a 1.3km circuit – a mix of bumpy grass and the roads around the hotel and car parks. Any temptation to wander into the woods or along the country roads were quickly curtailed by the 24-hour wall of security that kept any curious locals out, but also kept anyone that was checked into the bubble securely inside.

There were no emergency supplies picked up from the local Boots or Tesco. The only way was an online order that had to be cleared by security before delivery: just some black nail polish, low-calcium water and a toaster, the things an athlete requires when getting ready for potentially the biggest race of their life.

Even the hotel staff stayed on the grounds. Unless you were in the bubble package, nobody else passed through the gates, and once inside you could only leave to go to the race start alongside Buckingham Palace, or when you could finally hand in the “Bump” device on departure to your next destination.

The “Bump” was like a large medal around your neck which gave off a beep and blue light if you came within two metres of anyone else, and a continuous beep and red light if you were too close for too long. It meant you felt yourself continually taking two steps back whenever you came in close contact with another person.

On arrival you went straight to another building for the mandatory arrival Covid-19 test, then again the next day. This also served as a useful entry to my next destination which also required a negative test result.

The Nationale Netherlande (NN) is one of the first truly professional teams based out of the Netherlands, made up of international athletes from Kenya, Ethiopia, Uganda, USA and Europe, and organised a World Record Day in Valencia at the Estadio del Turia last night, located below street level in the Jardins del Turia, a city park that was formed from an old riverbed.

The central figure to the NN world record day was Joshua Cheptegei, the 2019 10,000m world champion from Uganda, also the reigning World Cross Country champion and who only recently broke the 5,000m record in Monaco, running 12:35.36, taking two seconds off the record held by Kenenisa Bekele from Ethiopia.

As well as helping with the livestream commentary here in Valencia, I was also looking after Australian athletes Matt Ramsden, Stewart McSteyn and Ryan Gregson, who had been charged with helping Cheptegei achieve his world record target and also leading a group of athletes in the same race who were aiming to run under 27minutes for the first time.

This all sounds good in theory, but in 2020 things are not so simple. With travel restrictions between countries, and restrictions on movements within countries, racing has been a challenge, and the lack of it maybe showed for some in the London Marathon.

Once again this meant filling in forms to travel to Spain, providing a negative Covid test prior to travel, a medical examination and Covid test on arrival and everyone contained in a hotel close to the park and stadium.

Coming from one bubble to another, this time we were allowed to walk across the street to the park where you can run along a 5km route marked with Cheptegei’s times for each kilometre of his world record run in Monaco. It’s also a short walk to the stadium where all eyes were on him as he took on 25 laps of the track; 63 seconds per lap was the requirement to have a shot at the record.

Just before Cheptegei lined up, the women had a shot at the 14:11.15 12-year-old 5,000m record held by Tirunesh Dibaba. The pacemakers were aided by pacing lights that were set at the world record pace. For all that spotlight and expectation, as if on cue 22 year-old Letesenbet Gidey from Ethiopia came out and ran 14:06.65 on the night, nearly five seconds faster than any women before.

Hot on her heels, Cheptegei clocked his second world record of the bubble season, running 26:11.02 for the 10,000m, making perfect use of the wavelength pacing technology to take over six seconds off Bekele’s previous mark. More than 10 seconds, off two world records, in one night. Unprecedented times indeed.