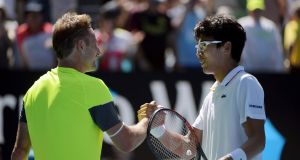 It might be as well for the general contentment of the Australian Open that Tennys Sandgren did not complete his fairytale run to the semi-finals, where old Roger Federer awaits young Hyeon Chung in a match for the ages that will surely lift the tone after two days of off-court controversy.

Not that the hitherto anonymous American with the crazy name and ranked 97 in the world did not give his all in three competitive sets against the impressive young Korean, who won 6-4, 7-6 (5), 6-3 in the hottest part of day 11. It was the manner of Sandgren’s leaving that curdled the cream.

Chung – who rates learning English as tough as improving his tennis – might not have said much of interest in his own short-answer press conference – apart from revealing he has attracted the commercial backing of Lacoste, IMG, Samsung, Rado and Yonex – but Sandgren perhaps said too much.

This should have been a fortnight of joy for Tennys – who previously had made a name for himself mainly because of, well, his name – so it was doubly unfortunate for him that he came across sounding like a cut-rate Donald Trump, whom he apparently admires, in a rant at the media for asking legitimate questions about his questionable interests in the alt-right underworld.

“You seek to put people in these little boxes so that you can order the world in your already assumed preconceived ideas,” he began. “You strip away any individuality for the sake of demonising by way of the collective. With a handful of follows and some likes on Twitter, my fate has been sealed in your minds.

“To write an edgy story, to create sensationalist coverage, there are a few lengths you wouldn’t go to to mark me as the man you desperately want me to be.” Et cetera, et cetera. Other truths lurk in the 18 months’ worth of tweets he wiped from his account.

President of the universe

Federer, meanwhile, continues to sound like the president of the universe. After hitting an ominous rhythm that Tomas Berdych was powerless to resist in the much cooler evening session, the defending champion said of Chung, “[He is] incredibly impressive in his movement. He’s got nothing to lose. I don’t either. We’ll see what happens.”

This is Federer’s 43rd slam semi, Chung’s first – as it will be for Kyle Edmund on Thursday against Marin Cilic.

Federer’s take on Edmund, whom he has never played but has hit with, was measured. “It’s a good situation to be in. He can hit freely now. No expectations whatsoever. He’ll maybe never be in this position ever again: to have so little expectations in some ways. Even though you’re young, first time in the semis, you’re like, ‘I’m going to tear this place into pieces, I’ve got incredible power right now.’ I feel like it should be very interesting.”

Federer’s last match of 2017 was in the first week of October in China, when he complained of back pain – so he has had his own fitness issues, however downplayed they might be. Yet in coming from 0-4 and 2-5 down in the first set to beat Berdych 7-6 (1), 6-3, 6-4, he maintained the only clean sheet in the draw.

His progress to his 14th Melbourne quarter-final has been aptly serene. There was little sign of trouble as he cruised through matches against Aljaz Bedene, Jan-Lennard Struff, Richard Gasquet and Marton Fucsovics without dropping a set.

Last year, when he simultaneously created history and drama by coming from 1-3 down in the fifth set to beat Rafael Nadal in the final – having returned to the tour after six months out injured – he had to come through two five-setters and an opening four-set match on his way to the final. Twelve months later, at 36, he looks as energised and commanding as when in his earlier pomp.

As he pointed out courtside, he broke a 4½-year slam drought in Melbourne 12 months ago. He took his career swag of majors to 19 at Wimbledon, fell over at Flushing Meadows and is now perfectly placed to keep his title here on Sunday.