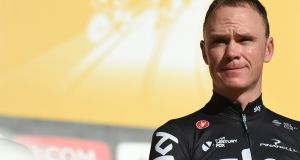 Chris Froome should be suspended by Team Sky during the investigation into alleged doping, says the UCI president. Photo: Artur Widak/NurPhoto via Getty Images

Team Sky have assured Chris Froome they will not suspend him from competition despite the advice of the head of cycling’s world governing body.

David Lappartient, the president of the International Cycling Union, told a French newspaper the team should suspend the four-times Tour de France winner while an investigation continues into how he failed a drugs test at the Vuelta a España last September.

But it’s understood that Team Sky will still enter Froome for the Giro d’Italia and this year’s Tour de France as planned unless any anti-doping rule violation is brought against the 32-year-old before then.

Lappartient, who found out about the failed drugs test the day after taking over from Brian Cookson as head of the UCI last September, told the French regional Le Telegramme he thinks the case against Froome could last another nine months.

“Sky should suspend Froome,” he said. “Now, it’s not up to me to interfere. Without wishing to comment on the rider’s guilt, it would be easier for everyone [were Sky to suspend him]. It’s up to [Sky’s team manager Dave] Brailsford to take his responsibilities. Quite apart from that, I think that’s what the other riders want. They’re fed up with the general image.”

A joint investigation by the Guardian and Le Monde in December revealed a urine test taken by Froome showed twice the permitted amount of the asthma drug salbutamol in his system. Froome admitted the adverse finding may never have been made public had the newspapers not investigated.

Team Sky and Froome deny breaking any anti-doping rules and are seeking to provide a legitimate explanation for the failed test. The team declined to comment on Lappartient’s remarks. UCI rules state that in cases like Froome’s the rider is not subject to a provisional suspension and is free to compete while the process is ongoing. Froome competed for Great Britain in the world time-trial championships after being notified of his failed test and continues to train as normal.

But other riders have expressed outrage that Froome will continue to ride, damaging the already battered image of the sport.

The Frenchman Romain Bardet said the case had made cycling a “laughing stock” once again while world time-trial champion Tom Dumoulin previously insisted his team, Sunweb, would have suspended him for a similar offence. – Guardian service