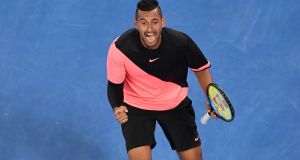 Nick Kyrgios of Australia celebrates winning his third round match against Jo-Wilfried Tsonga of France at the Australian Open. Photo: Julian Smith/EPA

Nick Kyrgios boosted hopes of a home winner at the Australian Open by beating his childhood hero Jo-Wilfried Tsonga in the third round at Melbourne Park.

Kyrgios attended the 2008 tournament, when Tsonga reached the final, as a 12-year-old fan and took a ball to each of the Frenchman’s practice sessions to get autographed.

The Australian had a bit of a letdown in the second set but proved the king of the tie-break, winning five points in a row in the final one and celebrating his victory with an exuberant pump of the fists.

“It was amazing,” he said. “I’d never won a match on this court. Playing Jo I was obviously very nervous. He was a guy I looked up to as a kid, still do, he’s a champion of the game.

“I was getting prepared for a fifth set. I just stayed composed, tried to make returns and fired it through. I’ve got doubles tomorrow and then I’ve got a tough match against (Grigor) Dimitrov.”

Kyrgios felt added tension because of the presence court-side of Hollywood star Will Smith. “I was so nervous when I saw him,” said the 22-year-old. “People think I’m cool but I just wanted him to think I was the coolest person ever.”

Rafael Nadal looked in ominous form in a crushing win over Damir Dzumhur to reach the last 16.

Playing in much cooler conditions than those which greeted the daytime matches, Nadal took an hour and 50 minutes to overcome the Bosnian 28th seed 6-1 6-3 6-1.

Last year’s runner-up, who plays 24th seed Diego Schwartzman next, has yet to drop a set and has put concern about the state of his knees firmly behind him.

Nadal said: “I needed hours on court, hours of practice, hours of playing sets with different players. That’s what I did. I think I did a good preparation here. I felt myself playing well. Here I am in the fourth round. That’s because I am doing the right things. Let’s see how far I can go.”

Things were tougher for third seed Grigor Dimitrov, the man Nadal beat in an epic semi-final 12 months ago.

Dimitrov has yet to find the form that carried him to the brink of a first grand slam final but there is no doubt about his desire and he battled past 30th seed Andrey Rublev 6-3 4-6 6-4 6-4.

The Bulgarian was taken to five sets by American qualifier Mackenzie McDonald in the previous round and was at least happy that he is heading in the right direction.

Dimitrov said: “I recovered well. Obviously today was another tough test for me. I just had to find a way again, simple as that. At least the game was a little bit better than the previous match.”

Dimitrov and Rublev served a remarkable 28 double faults between them, with the Bulgarian throwing in 15. “That’s absolutely unacceptable,” he said. “Hopefully I serve better next round.”

Dimitrov surely cannot afford a repeat against Kyrgios, who he lost to at the Brisbane International two weeks ago.