Dimitrov emerges on top after titanic battle with Kyrgios 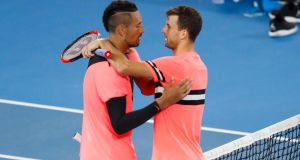 Nick Kyrgios of Australia and Grigor Dimitrov of Bulgaria embrace after their fourth round match at the Australian Open. Photo: Darrian Traynor/Getty Images

Nick Kyrgios told Grigor Dimitrov to believe he can win the Australian Open after the Bulgarian came out on top of a fierce battle under the lights on Rod Laver Arena.

Kyrgios appears to have largely won over a sceptical Australian public with his professional approach to the tournament and showed plenty of heart and fight as he tried to reach another grand slam quarter-final.

Edmund fought off weariness and Andreas Seppi to reach his first grand slam quarter-final in a tough battle.

After his gruelling five-set duel with Nikoloz Basilashvili in the intense heat on Friday, the key question was how well would Edmund have been able to recover.

Edmund struck 63 winners, including 25 aces, and his reward will be that blockbuster last-eight clash with third seed Dimitrov.

“It’s a good feeling,” said Edmund, who is fast becoming one of the most exciting young talents in the game.

“It was a really interesting match. I didn’t feel I got off to the best start, he was hitting the ball very clean. Once I broke him in the last game of the second set I changed the momentum.”

After Dimitrov’s victory over Kyrgios, the friends shared an intense moment at the net after the match, and Kyrgios said: “Sometimes I think he lacks a bit of belief. But I think he’s got the game and he’s proved to everyone that he can win one of these slams. So I just told him to believe in himself and hopefully he can go all the way.”

Dimitrov came into 2018 on the back of the biggest title of his career at the ATP Finals, while 12 months ago he came agonisingly close to reaching a first grand slam final here in a five-set loss to Rafael Nadal.

The Bulgarian’s performance was a huge step up from his first three rounds, and he said: “I just told myself now is the part you need to start enjoying it a little bit more and live in the moment.

“You never know how many times you’re going to be able to come out on Rod Laver Arena. That in itself gives me the motivation and that kind of kick — hey, man, you’re here now. Just play.”

Kyrgios was booed off his home stage 12 months ago after losing from two sets up against Andreas Seppi but this time left to a standing ovation.

“I bloody deserved it,” he said. “I lost tonight to one of the best players in the world. Went down swinging.

“Obviously I feel a lot better this time around. Last year I really didn’t know what I was going to do after the Australian Open. I feel like I have more of a vision and goal for this year. I think I’m in a good head space.”

There could well be a semi-final rematch between Dimitrov and Nadal, who survived a near four-hour marathon against pint-sized Argentinian powerhouse Diego Schwartzman, eventually winning 6-3 6-7 (4/7) 6-3 6-3.

The victory ensured Nadal will stay world number one whatever happens in the rest of the tournament, but he knows he will need to play better against sixth seed Marin Cilic in the next round.

He said: “It was a good test. I prefer to win in two hours than in four but moments like these help to be more confident in yourself, in your body.

“The most important thing for me is after not playing anything before here I am able to be in the quarter-finals. I played some great matches. Today was a little bit worse for moments, but I resisted very well. I’m going to need to play with more determination with my forehand in the next match. I am focusing on trying to make it.”

The former US Open champion said: “Throughout my career I knew that if I’m at the top of my game, I can challenge most of the guys on the tour and, with the win at the US Open, that just became stronger. My goal in this year is to win a grand slam. One or more would be good.”