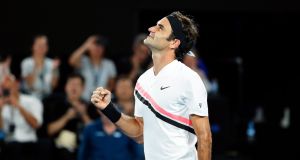 Dedending champion Roger Federer is through to the third round of the Australian Open. Photograph: Mast Irham/EPA

Roger Federer fought off the challenge of Jan-Lennard Struff to move into the third round of the Australian Open.

The defending champion benefited from playing in the relative cool of the evening unlike possible semi-final opponent Novak Djokovic and emerged an ultimately comfortable 6-4, 6-4, 7-6 (7-4) winner.

But German Struff, ranked 55, caused a few problems for the second seed, particularly in the third set. He broke the Federer serve for the first time this tournament to lead 3-1 but back came the Swiss to clinch victory in a tie-break.

Federer, who next faces Frenchman Richard Gasquet, said: “I knew he was going to go for his shots, it’s a question of protecting your own serve as well as you can, then try to get a break. I thought it was a good match, I enjoyed it.”

The 36-year-old revealed he did ask to play at night having played his first-round match late but said he would have been happy to play during the day.

“There’s maybe 60 guys asking for different things and I’m one of them,” he said with a sheepish grin. “It’s their call. I’m happy I didn’t have to go from night to day, I’m happy to play in the same rhythm.

“I wouldn’t have minded playing in the day because I like to think I thrive in those conditions. If you want to get to the top you have to play in all conditions.”

Meanwhile Federer’s compatriot Stan Wawrinka was knocked out of the Australian Open by unheralded American Tennys Sandgren on Thursday as concerns over his knee injury re-surfaced in a 6-2 6-1 6-4 defeat.

While the result was a huge shock, it was clear from the outset that the Swiss 32-year-old, champion in Melbourne in 2014, was hampered in his movement. Watching him grimace and clutch at his knee it was a surprise he even made it to the end of the match.

World number 97 Sandgren, who had won only one grand slam singles match compared to the three grand slam titles Wawrinka owns, produced a rock-solid display to claim the biggest scalp of his career, offering up only two break points.

The Tennessee native, named after his great grandfather rather than the sport, remained focussed throughout and sealed victory with his 11th ace.

Wawrinka had right knee surgery in August and Tuesday’s victory over Ricardas Berankis was his first match for six months, having only declared himself fit last weekend.

Despite clearly being way below 100 percent, 2014 champion Wawrinka remained positive. “You don’t enjoy matches like that, that’s for sure. Never easy to feel that way on the court,” he said.

“But I need to be still positive. I think the last 12 days was more than what I could have dreamed coming here. “Even today my knee was feeling way better than two days ago. If I look the big picture, I know it’s really positive.”