Sandgren accuses media of ‘demonising’ him for alt-right retweets 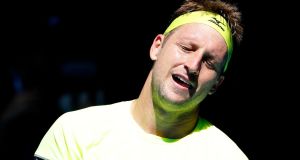 Tennys Sandgren accused the media of “demonising” him in a pre-prepared monologue following his Australian Open quarter-final defeat and refused to answer any more questions about his political beliefs.

The American has found his views under intense scrutiny following his sensational breakthrough at Melbourne Park and was forced to deny after his fourth-round win that he supports the controversial alt-right movement.

Sandgren insisted who he followed or retweeted on Twitter did not represent who he is but subsequently deleted all his messages on the social media platform bar one.

After losing 6-4 7-6 (7/5) 6-3 to Chung Hyeon, Sandgren walked into the press conference room stony-faced before reading the monologue off his phone.

He said: “You seek to put people in these little boxes so that you can order the world in your already assumed preconceived ideas. You strip away any individuality for the sake of demonising by way of the collective.

“With a handful of follows and some likes on Twitter, my fate has been sealed in your minds. To write an edgy story, to create sensationalist coverage, there are few lengths you wouldn’t go to to mark me as the man you desperately want me to be.

“You would rather perpetuate propaganda machines instead of researching information from a host of angles and perspectives while being willing to learn, change, and grow.

“You dehumanise with pen and paper and turn neighbour against neighbour. In so doing, you may actually find you’re hastening the hell you wish to avoid, the hell we all wish to avoid.

“It is my firm belief that the highest value must be placed on the virtue of each individual, regardless of gender, race, religion or sexual orientation. It’s my job to continue on this journey with the goal of becoming the best me I can and to embody the love Christ has for me, for I answer to Him and Him alone.”

Serena Williams appeared to weigh in to the controversy when she tweeted “Turns channel” as the match began. Sandgren has been disparaging about the 23-time grand slam singles champion in the past.

Sandgren did not feel the controversy had impacted on his performance and said he would head home to Tennessee to reflect on everything that has happened this fortnight.

“I’m going to go home and enjoy time with my family, turn off my phone, just really reflect on the last two weeks, reflect where my life has gone to, where I’m at, where I am in this stage at 26, who I am as a person, who I want to continue trying to be, where I want to go in the sport, where I want to go as a man,” he said.

“I constantly try to be introspective as to what’s going on in my life. This has been a lot of information to digest in the last few weeks. So I need to take ample time to do so so I can move forward correctly.”

1 Kevin McStay: Maybe a knockout All-Ireland Championship is the long-term solution?
2 Gerry Thornley: Ireland don’t want to box themselves into a corner
3 No further players to be called up to Ireland squad to face Georgia
4 The Offload: Ireland are stuck in no man’s land
5 Klopp sings ‘multi-instrumentalist’ Firmino’s praises as Brazilian back on form
Real news has value SUBSCRIBE