Ireland triumph in high-scoring clash with Scotland to secure series 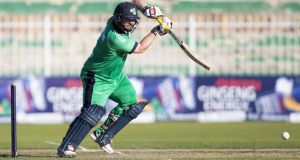 Paul Stirling top-scored with 74 as Ireland equalled their highest ODI score of 331 in the victory over Scotland in Dubai. Photograph: Nezar Balout/AFP/Getty Images

Ireland made it four straight wins under new coach Graham Ford as they clinched the Desert Tri-Series with a 24-run victory over Scotland in a high scoring encounter in Dubai.

Ireland equalled their highest ODI total of 331, but they needed them all as a battling Scotland gave them a scare before finishing just short on 307.

Batting first, Ireland once again lost William Porterfield early, but Paul Stirling and Andrew Balbirnie shared their second consecutive century partnership to get their side back on track.

After a hesitant start Simi Singh soon found his range, as he and Niall O’Brien went through the gears, sharing a fourth-wicket stand of 97 in 13 overs. O’Brien (51) fell shortly after reaching his 17th ODI 50, and Singh went four balls later for 45.

There was no respite for the beleaguered Scottish attack as Kevin O’Brien – winning his 300th cap – and Gary Wilson plundered 85 in just eight overs to take the total beyond 300.

O’Brien cleared the ropes four times in a hard-hitting 46 from just 24 balls, while Wilson’s unbeaten 40 came from 31 balls (two fours, two sixes) as Ireland added 103 in the final 10 overs to post 331 for six – the same total they made against Zimbabwe in the 2015 World Cup.

Scotland, to their credit gave it a real go as Michael Jones (74) made his second half century in his first two games, adding 67 with George Munsey (30) and 60 with Matt Cross (33).

The required rate was soon into double figures but that only spurred the big-hitting duo of Michael Leask and Calum MacLeod to new heights as they kept their supporters dreaming, smashing 95 off 59 balls to leave the equation at 68 needed from 30 balls.

However George Dockrell (two for 43) bowled Leask for 59, while Barry McCarthy accounted for MacLeod (58) shortly afterwards and the Irish could breathe again as they completed the win – their sixth successive in ODIs.

Ireland beat Scotland by 24 runs to win the tri-series

Gordon D’Arcy: Where is Ireland’s progress under David Nucifora? 06:00
Johnny Sexton hopeful he will play on until the next World Cup 06:00
Darragh Ó Sé: Managers have steered three contenders to a better place 06:00
Seán Moran: Waterford give hurling an underdog story of its own 06:00
James Horan happy with the quality of Mayo’s young guns 01:00