Dave Hannigan: The brutal regime at the heart of US gymnastics 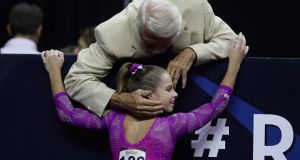 Ragan Smith is congratulated by Bela Karolyi during the 2016 US Olympic Trials. Photograph: Ezra Shaw/Getty Images

Bela Karolyi is the most successful coach in the history of gymnastics. From Nadia Comaneci at the Montreal Olympics to the USA’s so-called “Magnificent Seven” two decades later, his protégés transformed the sport forever. His preferred training methods included imposing a brutal regime of physical, emotional and psychological abuse that left many of his female charges battling self-esteem issues and eating disorders. The kind of troubling detail that has always made any discussion of his sporting legacy sound offensive and just wrong-headed.

Over the past week or so, America has been gripped by the sentencing hearing of Dr Larry Nassar, the former USA Gymnastics physician  who pleaded guilty to multiple counts of sexual assault against minors and was yesterday sentenced to serve at least 175 years. One by one, women have stood up in a Michigan courthouse and delivered victim impact statements, powerful, moving testimony, recounting the horrors he inflicted upon them as young girls in his care. Through it all, Karolyi and his wife Marta, though not in the room, have loomed over the proceedings.

Although he began his reign of terror elsewhere, some of Nassar’s crimes were committed at USA Gymnastics’ national training centre in Huntsville, Texas, a purpose-built complex known as the Karolyi Ranch. The epicentre of the sport here for more than two decades.

To be invited to train at the Karolyi Ranch was potentially life-changing, the moment a young girl morphed instantly from one more promising talent to genuine Olympic hopeful, a status that brought the possibility of gold medals and a type of fame that saw generations of champions staring down from the backs of cereal boxes. Not to mention, too, that it might yield riches that could go some way to repaying the vast sums ambitious parents invested to help them rise through the sport. To be invited to the Karolyi ranch was also to discover none of those things were worth what had to be endured there.

Long before the Indianapolis Star started reporting the child abuse epidemic in the sport, it was known that the atmosphere at the ranch was somewhat sinister, reeking of fear and loathing. Obsessed about the weight of the girls, the Karolyis often deprived them of food and water, fat-shamed those who were carrying (what they perceived to be) excess poundage, often forcing them to strip to their underwear in front of their peers in a ritual designed to embarrass. All injuries were downplayed (one girl participated for three years with an untreated fractured wrist), and those eventually deemed to require medical attention were placed in the hands of Dr Nassar.

Befitting a man given carte blanche to revitalise American gymnastics, Karolyi was the kind of legendary control freak who micro-managed every detail of the set-up, banning parents from staying at his complex lest they interfere with training. Inevitably, many in and around gymnastics are now asking how he could not have known that Nassar, in a textbook grooming technique, was secretly passing contraband items like coffee and snacks to these beleaguered kids, veritable prisoners in that isolated ranch in Sam Houston National Forest.

In Joan Ryan’s seminal Little Girls in Pretty Boxes, one of the great American sports books, she detailed how, when travelling for competitions, the Karolyis used to stay in the same hotel corridors as the team so they could monitor who went in and out of their rooms. Girls were banned from ordering room service and the coaches kept vigil to try to stop them securing extra food by other means. Consequently, the gymnasts went to extraordinary lengths to try to eat, even having sympathetic male team-mates drop smuggled parcels for them to pick up in stairwells.

Ryan’s expose was published nearly quarter of a century ago yet no administrator (and far too few parents) thought it might be worth reconsidering the Karolyis’ outsized influence. Indeed, since Bela stepped down as national team co-ordinator in 2001, his wife has held that position and they remained the most powerful tandem in the sport. The disgraceful methods they employed were deemed less important than the fact they turned the US from also-rans (before they defected from Romania in 1981) to serial Olympic contenders.

When Jamie Dantzscher criticised Karolyi for being too hard on the team at the 2000 Olympics, she and anybody else daring to question the guru were derided by Sally Jenkins, a columnist for the Washington Post.

“You may not like this man with the bristling mustache,” wrote Jenkins of Karolyi, “the eyes like burning glass, and the fierce booming voice; it may bother you to see him hulking over tiny bodies and urging them to deadly feats, but he is the maker of modern gymnastics, transforming it from a sport of delicacy to power.”

Eighteen years later, Dantzscher stood before a judge and eloquently described her suffering at the hands of Nassar at the Karolyi Ranch. As clips of her and the other speakers went viral last week, Simone Biles, a reigning Olympic champion, questioned why she should have to return to that training centre, where she too was molested, to start her preparations for Tokyo 2020. USA Gymnastics belatedly reacted by announcing the organisation was cutting all ties with the ranch, several of its directors also resigned, and sponsors began ripping up contracts.

On Monday, it emerged the local sheriffs in Texas have opened an investigation into the Karolyi property and what went on there. Far too little. Far too late.