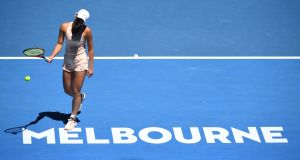 Ukraine’s Marta Kostyuk lost out to Elina Svitolina in the third round of the women’s singles at the Australian Open in Melbourne. Photo: William West/Getty Images

Caroline Wozniacki and Elina Svitolina avoided more drama to reach the fourth round of the Australian Open but French Open champion Jelena Ostapenko was knocked out by Anett Kontaveit.

The Latvian had her left thigh heavily strapped after losing the first set and, although she took the second comprehensively, it was Estonian Kontaveit who prevailed in the decider to win 6-3 1-6 6-3.

Ostapenko’s exit means there are only two former grand slam champions left in the draw in Maria Sharapova and Angelique Kerber, and they clash in the third round on Saturday.

Second seed Wozniacki is the only player in the bottom half to have made a slam final before, and she stayed on course to emulate her two appearances in the US Open showpiece with a 6-4 6-3 victory over Kiki Bertens.

Wozniacki had to come back from 1-5, 15-40 in the deciding set against Jana Fett in the second round but stepped up her game and was a relatively comfortable winner against 30th seed Bertens.

The Dane, who did not wrap up victory until after midnight, said: “I’m playing with house money. I was already out of the tournament and on my way home. I got a second chance and I’m just going to see how far I can go.”

Wozniacki next plays 19th seed Magdalena Rybarikova, who battled to a 7-5 3-6 6-1 victory over Kateryna Bondarenko.

Fourth seed Svitolina ended the run of her 15-year-old Ukrainian compatriot Marta Kostyuk with a 6-2 6-2 victory on Rod Laver Arena.

Kostyuk’s success, coming through qualifying and reaching the third round, has been one of the stories of the tournament but she found Svitolina too strong and too experienced.

Kostyuk was given a wild card into qualifying after winning the junior title 12 months ago and must now focus on working her way up the professional game from her current ranking of 521.

Asked how much she learned, Kostyuk said: “A lot. How much do you have to pay Svitolina to have a one-hour lesson? I got it for free.

“She’s a great player, but what I learned is that you can play against everyone. I had the chances, but because I thought she is incredible, like she’s a god, I cannot do anything against her, that’s the problem.”

The pair shared a warm hug at the net and Svitolina had some encouraging words for Kostyuk, who revealed she was in tears after the match.

“It was sad playing another Ukrainian girl,” said Svitolina. “She’s a great fighter. She has a great future — we’re going to hear a lot more about her.”

Svitolina revealed after her second-round struggle against Katerina Siniakova that she has not been feeling healthy but she was strong and focused against Kostyuk and is a hot favourite to reach the semi-finals.

The world number four is the only seed left in her quarter of the draw and next faces Czech qualifier Denisa Allertova.

Kontaveit will meet Carla Suarez Navarro while Croatian Petra Martic, who is fast making a name for herself at the slams, takes on a rising talent of the women’s game in Belgian Elise Mertens.